MS Dhoni served as the Lieutenant Colonel (Honorary) in the Parachute Regiment of the Territorial Army after a two-month leave from cricket. 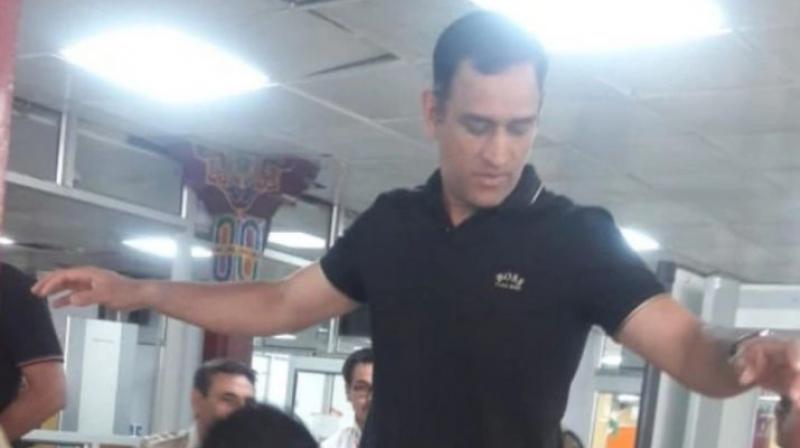 He was recently spotted at the Leh airport after having completed his training. Photos of him at the airport have since gone viral. (Photo: Twitter)

Mumbai: MS Dhoni served as the Lieutenant Colonel (Honorary) in the Parachute Regiment of the Territorial Army after taking a two-month leave from cricket to serve his unit and was with the unit in the Kashmir Valley until August 15 as a part of Victor Force.

MS Dhoni was in Ladakh on the eve of India's 73rd Independence Day. He was welcomed by the Army personnel who also took him to the General Hospital of the Army. Several reports have stated that the Indian cricketer also visited the Army General Hospital and paid tributes to the martyrs at the Siachen War Memorial. The reports also have stated that after the veteran wicketkeeper-batsman went to Ladakh, his pictures went viral. In the photos, he was found engaging with the troops.

He was recently spotted at the Leh airport after having completed his training. Photos of him at the airport have since gone viral. Here are a few of them.

Another photo of #MSDhoni at the Leh airport pic.twitter.com/ILKEpL79wt

Although there were speculations regarding Dhoni’s retirement after India were knocked out of the World Cup by New Zealand in the semi-final, MSK Prasad, the Board of Cricket Control in India (BCCI)’s chairman of selectors, stated that Dhoni won’t be retiring just yet.