Earlier, when asked if the CAC should also have an opinion in selecting the support staff, Kapil responded in the positive. 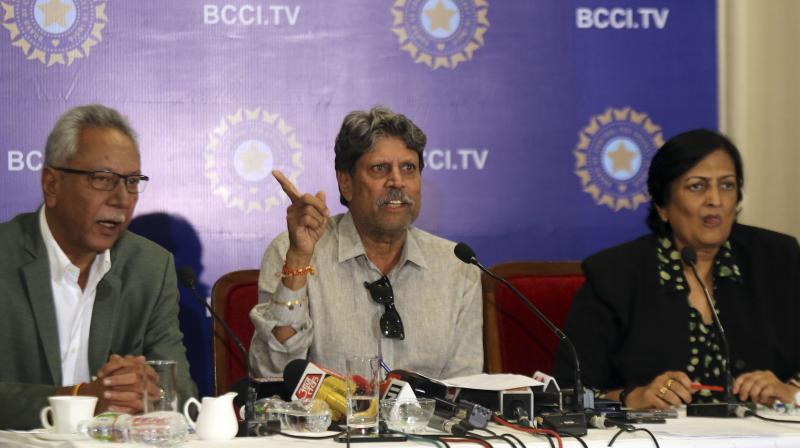 The selection of Ravi Shastri's coaching team will take place on Monday and the interviews for the batting, bowling and fielding coaches will be conducted by the national selection committee headed by MSK Prasad. (Photo: AP)

New Delhi: The Kapil Dev-led Cricket Advisory Committee (CAC) cannot be made part of the selection process for the Indian team's support staff as "time constraints will not allow" BCCI to amend their constitution.

The selection of Ravi Shastri's coaching team will take place on Monday and the interviews for the batting, bowling and fielding coaches will be conducted by the national selection committee headed by MSK Prasad. The administrative manager's post is also up for grabs.

On Friday, after reappointing Shastri for a two-year term, Kapil, along with co-members Anshuman Gaekwad and Shantha Rangswamy, expressed their willingness to be part of the interview process for the support staff.

"There is no time left for the constitutional amendment. It's already Saturday today and tomorrow the offices are closed. The interviews will start at 10 am on Monday. For CAC to be a part of the support staff selection process, the legal team needs to vet it and the necessary changes need to be incorporated. Unfortunately, there is no time for that," a senior BCCI official, privy to development, told PTI.

Earlier, when asked if the CAC should also have an opinion in selecting the support staff, Kapil responded in the positive.

"Yes, our opinion should be there. If you ask me, we have (sent) a recommendation to the Board about the selection process of the support staff as well. It is not right if we are not doing that job also," Kapil said.

"We told them that we would like to be part of the process that finalises on the appointment," the country's first World Cup-winning skipper had added.

Bharath Arun is favourite to retain his post as the bowling coach due to the stupendous performance put in by the fast bowling unit in the last two years.

R Sridhar will face stiff competition from Jonty Rhodes for the fielding coach's position while current administrative manager Sunil Subramaniam will start on a backfoot due to his misconduct and subsequent unconditional apology during the ongoing tour of the Caribbean.