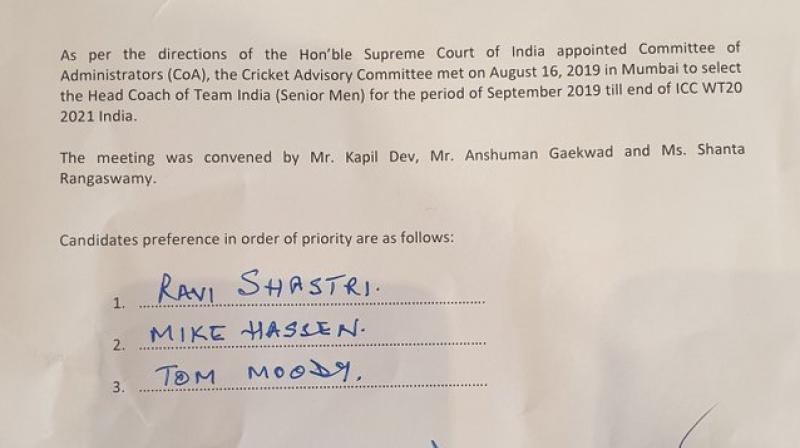 Shastri has been reappointed for a two-year period, ending with the 2021 T20 World Cup in India. (BCCI/Twitter)

Mumbai: The Kapil Dev-led Cricket Advisory Committee (CAC) was trolled on social media after their official recommendation to BCCI about the appointment of Team India's head coach had a spelling mistake.

“Number three was Tom Moody, number two was Mike Hesson. Number one is Ravi Shastri as all of you were expecting... (But) It was a very close race,” said Kapil Dev at the press conference to announce the decision in Mumbai.

In the official recommendation which was made public by BCCI, the CAC wrongly spelt Mike Hesson’s name, which irked the netizens who expressed their frustration through Twitter.

Shastri has been reappointed for a two-year period, ending with the 2021 T20 World Cup in India.

The CAC reappoints Mr Ravi Shastri as the Head Coach of the Indian Cricket Team. pic.twitter.com/vLqgkyj7I2

Could've just maybe at least Googled Mike Hesson for the correct spelling! You know, just for the heck of it.

@therealkapildev @TomMoodyCricket @CoachHesson They could not even write Mike Hesson''s spelling in the form properly! Were they really that interested in other candidates or it was just a sham to fool public and decision was already made. Very bad decision Kapil and team

So true. Their evaluation sheet was a bigger disgrace. Also got Mike Hesson’s spelling wrong. Terrible

Incorrectly spelling Mike "HESSON" on this bizarre letter shows just how farcical this entire process was.

Any bets as to what Shastri said in his presentation to seal the deal? https://t.co/pLa57Y7vpT

Spelling hesson as hassen is just a testament to how this whole thing was so casual for them lmao, nothing more than a freaking eyewash. https://t.co/tqTu31Kalb

So after all the song and dance @RaviShastriOfc is handed the job for his third term.

I don't know who this Mike Hassen fellow is but he came damn close! pic.twitter.com/WkmgBDNxl3

Order of preference? This is such a bizarre way pf presenting. Why would anybody at number 2 or 3 be picked? You decide on recruiting 1, the answer should be 1.
Also, Hesson not Hassen!