Manish Pandey, Krunal Pandya shine as India A take 3-0 lead against Windies A

With the win, India A have taken an unassailable 3-0 lead in the five-match series. 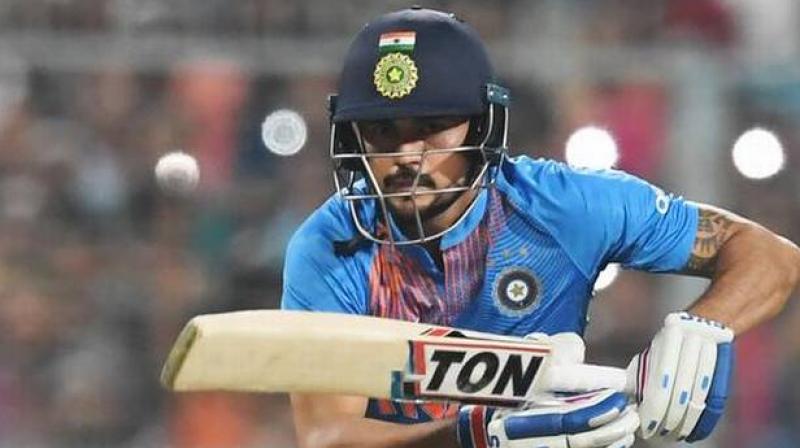 India A will take on West Indies A for the fourth unofficial ODI on July 19 at Coolidge Cricket Ground. (Photo: AFP)

Antigua: Skipper Manish Pandey's century before a five-wicket haul by Krunal Pandya helped India A secure a 148-run win over West Indies A in the third unofficial ODI at the Sir Vivian Richards Stadium on Tuesday.

With the win, India A have taken an unassailable 3-0 lead in the five-match series.

Chasing a target of 296, West Indies A got off to a steady start. John Campbell and Sunil Ambris formed a 51-run stand for the opening wickets. Fast bowler Navdeep Saini got a major breakthrough which resulted in no batsman being able to settle in thereafter. Saini dismissed Campbell for 21 and soon after Ambris (30) got leg-before off Avesh Khan, reducing West Indies A to 65/2 after 13.1 overs.

Skipper Roston Chase and Raymon Reifer tried to inch closer to 100-run mark but Pandya struck for India A and bowled Chase (15). The Caribbean side managed to go past 100 runs but soon after Pandya returned and dismissed Reifer (19). In the same 26th over, Pandya got rid of Jonathan Carter (4), reducing West Indies A to 103/5 after 25.5 overs.

In the next over, Washington Sundar dismissed Devon Thomas cheaply for one. Pandya and Hanuma Vihari rattled the lower order, claiming two wickets each. Pandya removed Rovman Powell (1) and Romario Shepherd (4), while Vihari picked up the wickets of Rahkeem Cornwall (5) and Keemo Paul (34). West Indies A folded on 147 after 34.2 overs.

Earlier, as India A elected to bat first, Pandey and Shubman Gill powered the team to post an impressive total of 295 runs for the loss of six wickets in their 50-over quota. The team suffered a minor hiccup in the third over as they lost Anmolpreet Singh for a duck.

Shreyas Iyer joined Gill and the duo took India A past 100-run mark. All-rounder Rahkeem Cornwall with his offspin ability pulled things back, breaking a 109-run partnership for the first wicket. Cornwall got Gill caught behind for a well-compiled 77. Soon after Iyer followed Gill back to the pavilion as Cornwall returned and dismissed him for three shy fifty.

Skipper Pandey and Hanuma Vihari formed a solid 110-run stand to well position their side before Raymon Reifer removed Vihari (29), leaving India A at 247/4 after 44 overs. Towards the end, Ishan Kishan chipped in with 24 runs before losing his wicket to Keemo Paul. In the final over, Pandey (100) got leg-before off Romario Shepherd.

India A will take on West Indies A for the fourth unofficial ODI on July 19 at Coolidge Cricket Ground.