Only once, New Zealand in 1973, has a team made over 400 in the final innings at Nottingham. 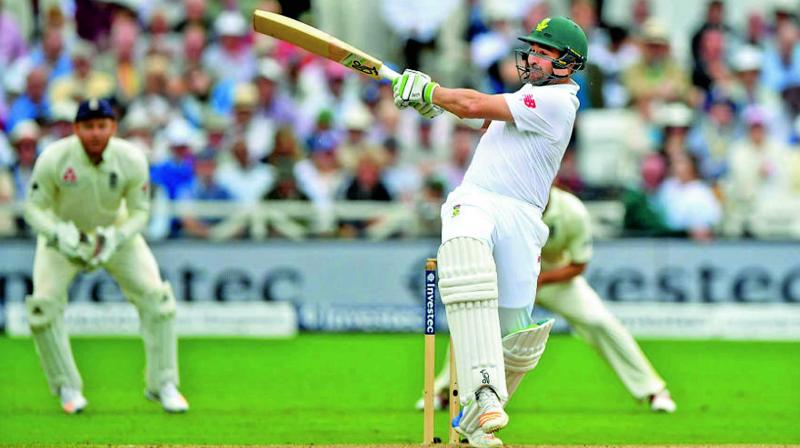 Dean Elgar plays a shot en route to his knock of 80. (Photo: AP)

Ottingham, England (AP): South Africa set England an almost insurmountable 474 to win the second test after declaring its second innings on 343-9 on Sunday. England saw out four testing overs before stumps to be 1-0, but has two full days left to survive if it is to save the match and preserve its 1-0 lead in the four-test series.

South Africa's big lead was built on second-innings half-centuries by opener Dean Elgar (80), Hashim Amla (87) and captain Faf du Plessis (63), who is on course to lead his team to a series-leveling victory on his return after missing the defeat at Lord's for the birth of his first child.

South Africa also had some fun at the back end of its second innings as the declaration approached in the late afternoon, with Vernon Philander (42) and Morne Morkel (17 not out) given license to swing at anything in a final hurrah.

Morkel connected for three fours and Philander heaved Moeen Ali away for two big sixes off successive balls before falling caught and bowled to the spinner.

Ali finished with 4-78 to lead England's bowling effort but the Day 3 pitch didn't offer the pronounced swing and seam movement for the quick bowlers it did in the early stages of this test. Instead, there were signs late in the day of uneven bounce as the surface wears away, something that will be in South Africa's favor over the final two days.

Elgar and Amla, continuing their partnership from Day 2, put on 135 for the first wicket in a stand that wasn't flashy or fast, but ground down England's bowlers and ensured South Africa held the upper hand from the start of the day onward. They both had let-offs, chances that might have changed the complexion of the day if England had taken them.

First, Amla got away with what appeared to be a faint outside edge behind off Stuart Broad when on 25. Umpire Simon Fry turned down a half-hearted appeal by fielders and England didn't go for a TV review, with replays showing Amla got a nick.

Elgar was missed just after reaching 50 when James Anderson couldn't hold on to a flying, one-handed chance at gully, also off Broad. Reflecting England's bowling struggles, Broad returned figures of 0-60 and Mark Wood 0-68. Anderson took 2-45 to take his match haul to seven wickets.

England had South Africa under real pressure just once in the day, when Ben Stokes (2-34) served up a spell of aggressive short-pitched bowling that unsettled Elgar and Amla and got Elgar out when he spooned a catch to backward square leg. Anderson removed Quinton de Kock next over for one, but the Amla-Du Plessis stand seemed to have taken the game well out of England's reach.