At a press conference held at MCA for North Mumbai Panthers, Prithvi was unable to make a choice between the two ace openers of India 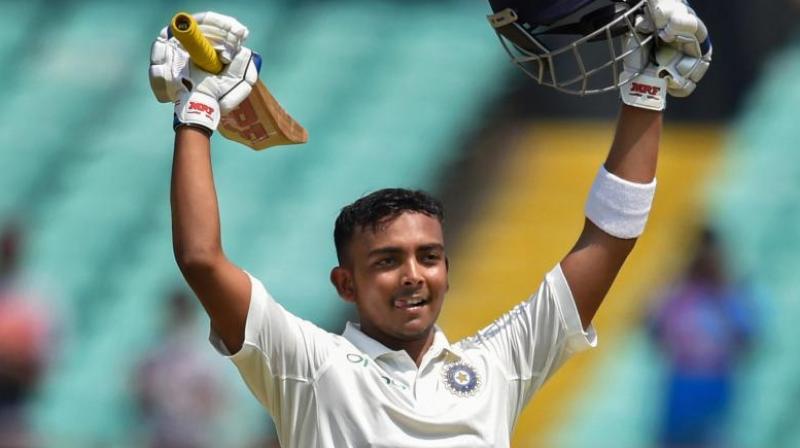 Shaw managed to score 353 runs in 16 matches in IPL 2019. His highlight performance of the tournament was against KKR when he smashed 99 runs off 55 balls, comprising 12 fours and 3 sixes. (Photo: PTI)

Mumbai: Youngster Prithvi Shaw, who has missed out an opening for India in the upcoming World Cup, is pacing his bets on the country’s openers Rohit Sharma and Shikhar Dhawan to really perform for the country.

At a press conference held at Mumbai Cricket Association for North Mumbai Panthers, Prithvi was unable to make a choice between the two ace openers of India. Prithvi said, “I’m comfortable opening the innings with both players. It’s an honour for me to bat with players who I’ve admired while growing up. So, it’s a big thing for me to bat with either of the players.”

Prithvi Shaw at the Press Conference at MCA.

Shaw managed to score 353 runs in 16 matches in IPL 2019. His highlight performance of the tournament was against KKR when he smashed 99 runs off 55 balls, comprising 12 fours and 3 sixes.

The press conference was held with regard to the T20 Mumbai league which commenced on May 14 and will conclude on May 26. North Mumbai Panthers is one of eight teams participating in the League, and Prithvi Shaw has been assigned the captaincy.

Along with Prithvi Shaw, North Mumbai Panthers’ coach Umesh Patwal and co-founder Rajdip Gupta were also present at the press conference. The trio was also accompanied by veteran Pravin Tambe who is also an integral part of the team because of his age and experience. Emerging players of the team—Karan Nande and Sairaj Patil were also given the chance to share the stage.

Veteran Pravin Tambe also praised Prithvi Shaw by saying that he has the ability to lead a team at such a young age. He added, “We thought that Prithvi won’t join the practice sessions of our team due to his IPL fatigue. But he surprised everyone by attending the session. His plan is to take one game at a time and has a very bright future.”

Prithvi also stated that he was a bit disappointed due to his ankle injury which occurred in a warm-up match before the Australia series. But he knew that he would bounce back stronger after the injury.

The 19-year-old also shared his views on being coached and mentored by Ricky Ponting and Sourav Ganguly while playing for Delhi Capitals in IPL 2019. Prithvi said, “I’ve learned a lot playing under these legends that have the experience of playing 15-20 years of international cricket. Rather than focusing on batting technique or skills, they would concentrate on preparing us mentally. I didn’t feel nervous while batting in such a big tournament because of them.”

Mumbai North Panthers will face NaMo Bandra Blasters in their next match on May 17 at 7:30 pm.