On the bowling front pacer Umesh Yadav has delivered for the team, taking 17 wickets so far. 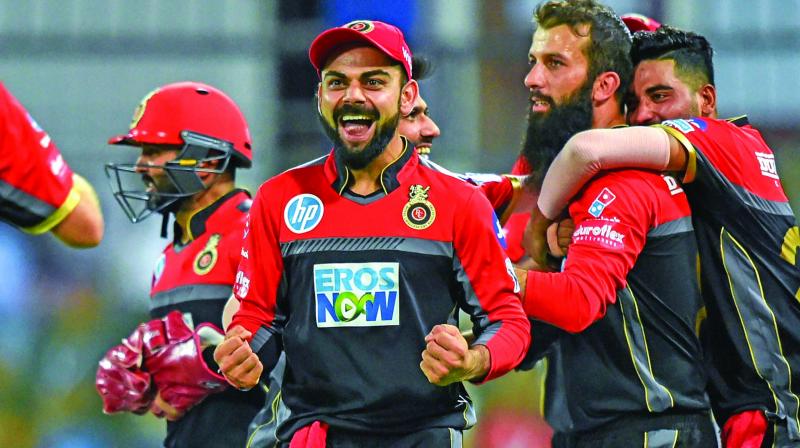 The consecutive victories over Delhi Daredevils and Kings XI Punjab have revived RCB’s hopes, while SRH has been on a roll, having won nine matches out of 12.

Bengaluru: Their chances of making the playoffs still hanging by a thread, Royal Challengers Bangalore will take on table-toppers Sunrisers Hyderabad in another must-win Indian Premier League encounter, here on Thursday.

The consecutive victories over Delhi Daredevils and Kings XI Punjab have revived RCB’s hopes, while SRH has been on a roll, having won nine matches out of 12.

RCB are still languishing at the second last position on the table, while SRH are on top of the table with 18 points. Virat Kohli’s RCB has endured a tough season, having lost seven of its 12 matches so far but the recent turnaround has rekindled hopes of a possible shot at the playoffs berth provided some other results go the team’s way.

The hosts are overtly dependant on Kohli and South African swashbuckler AB de Villiers. The two have combined to score nearly half of RCB’s total runs this season but the side needs bigger contributions from the likes of Moeen Ali and Corey Anderson.

In peerless form, Kohli has been a standout performer with 514 runs from 12 games. De Villiers (358 runs) is next to him, although he has played two games less than the Indian.

On the bowling front pacer Umesh Yadav has delivered for the team, taking 17 wickets so far.

SRH, on the other hand, depend quite a lot on opener Shikhar Dhawan (369 runs) and skipper Kane Williamson (544 runs) for inspiration.

Williamson has been an astute leader, who would look to consolidate the team’s top spot and ensure a top-two finish at the end of the league stage.

Apart from Dhawan and Williamson, Yusuf Pathan (186), Manish Pandey (189) and Shakib Al Hasan (166) have also chipped in at crunch situations for SRH. But what has been truly outstanding for SRH is their diverse bowling attack. The bowlers, led by pacer Bhuvneshwar Kumar (8), have been terrific. Bhuvneshwar has been backed up superbly by Siddharth Kaul (13 wickets), Sandeep Sharma (8), leg-spinner Rashid Khan (13) and Shakib Al Hasan (12).