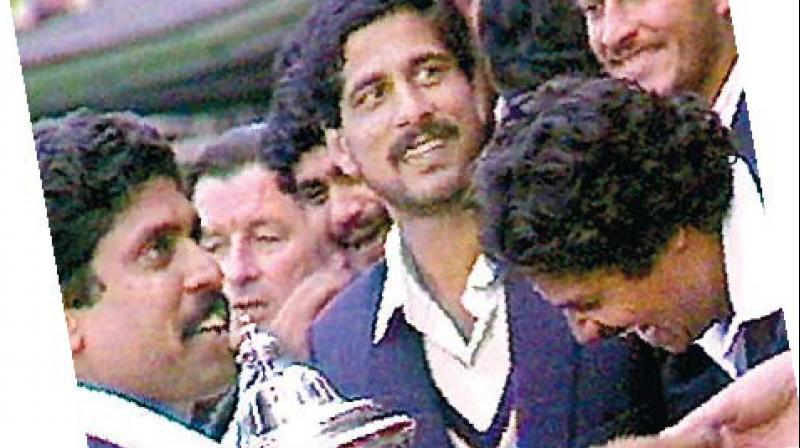 New Delhi: Some were rich in talent, some were mavericks and some others could bring in the crowds as pure entertainers. They were the Indian cricketers of '80s and '90s, who were unlucky to miss the gravy train called the Indian Premier League.

Take for example Krish Srikkanth. Could he have hooked a Pat Cummins bouncer without helmet? How Manoj Prabhakar would have bamboozled Ben Stokes with a slower delivery? If Kapil Dev had to face Jasprit Bumrah in the 19th over, what delivery would the Mumbai Indians star have thrown at the Indian legend?

PTI looks at 10 former India players who missed the IPL, but had they been active today, they could have forced the Ambanis and the Shah Rukh Khans to loosen their purse strings a tad more.

1. Kapil Dev: Perhaps India's greatest all-rounder across all generations. India's best swing bowler and a batsman who hit sixes as nonchalantly as he chewed gum. He would have opened the bowling, bowled an over in the middle and one at the death. And of course, he would have scored sixes in style. All teams would have reached for their cheque books for the 'Haryana Hurricane'.

2. Krishnamachari Srikkanth: He was a batsman way ahead of his time. A show-stopper, a man who brought in the crowds. He could pull Andy Roberts for a six, hook Patrick Patterson without a helmet and score at run-a-ball. He could have adjusted accordingly and may be CSK would have outbid every other franchise. (Why CSK? Because he is a Tamil?)

3. Vinod Kambli: A made-for-IPL cricketer, not only for his batting talent but also his sartorial flamboyance that fits well with the current streak of garishness. Diamond studs, gold-plated belts, a flaming personality with a game to match the brashness. He was Hardik Pandya multiplied by 10 in the '90s. A murderer of spinners, Kuldeep Yadav or Yuzvendra Chahal would have had sleepless nights. Sachin Tendulkar and Kambli for MI. Not bad at all.

4. Mohammed Azharuddin: Between overs 10 and 20, he could have been a nightmare for the bowlers. He knew how to find gaps with ease and his footwork against spinners was at a different level. At point or extra cover, he would have saved at least 25 runs in every game. Not just that. When fitness was considered perfunctory, Azhar stood apart with his blazing running between the wickets. A captaincy candidate and Eden Gardens' favourite. KKR could have been his team.

5. Ajay Jadeja: One of the most intelligent cricketers to have ever played for India. He could pace the innings and the man who could finish games just like Mahendra Singh Dhoni did during his best years. Like Azhar, his agility on the field was nearly of current standards. A brilliant fielder, who could, may be, chip in with a couple of overs. Good choice for Delhi -- whether Daredevils or Capitals.

6. Manoj Prabhakar: Swinging the new ball and those slower deliveries in death overs, his utility would have been exactly what IPL franchises look for. Not exactly a big-hitter but he could anchor the innings from one end if there was a good batsman at the other end. A good choice for Rajasthan Royals, a team where he could have expressed himself more.

7. Robin Singh: Another all-rounder, who could have invited intense bidding wars. A big hitter, tight medium pace bowler and a solid fielder within the 30-yard circle, Robin could have been any captain's 'go-to' player. Sunrisers Hyderabad, which judiciously builds its team every year, could have been his home.

8. Ravi Shastri: Tight left-arm spin bowling, ability to bat at any position, including opening, and he could hit spinners for sixes. Shastri was the best captain that the Indian team never had save a Test and a handful of ODIs. In a parallel universe, he could have been the captain of Chennai Super Kings with his cricketing acumen.

9. Maninder Singh: In his best years, Maninder had everything, flight, loop, deception and an attacking mindset. Left-arm orthodox bowlers are a necessity in T20 cricket and his talent would certainly have been rewarded. He could have been a hit for Kings XI Punjab.

10. Javagal Srinath: India's fastest bowler in his time, he was every captain's dream with his pace, bounce and consistent inward movement. He would have given early breakthroughs on more occasions than one. He could have been a real deal for the RCB at the Chinnaswamy. The Indian pacer that Virat Kohli missed all these years.