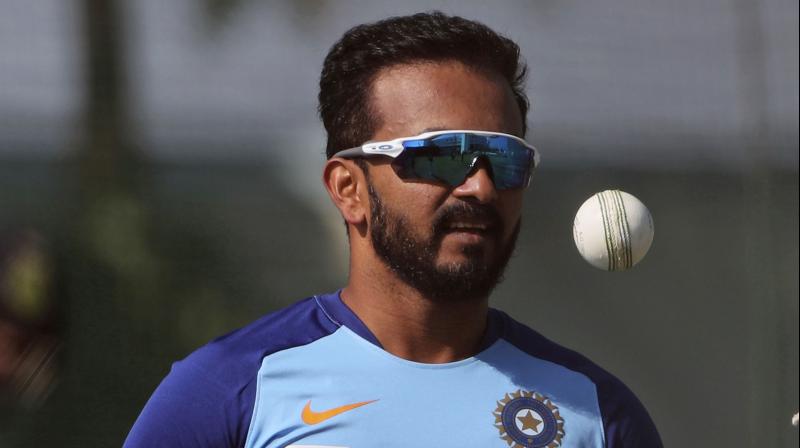 Chennai: Middle-order batsman Kedar Jadhav has said that MS Dhoni is his favourite cricketer and credited the former Indian skipper for helping him to extend his career.

Jadhav made the revelation during an Instagram Live session on the official handle of Chennai Super Kings.

"With my potential, maybe I would have played 20-odd matches. But if I have played four times that figure I owe it to MS Dhoni. He has helped me to express my game. He always had a calming effect on me. If you get that kind of confidence from your captain, then there is nothing more you need," he said.

“When I first met MS Dhoni, I thought he would be very strict because that was the only image registered in my mind of my favourite cricketer although I have played many matches against him in the IPL before that,” Jadhav said.

Since making his debut in 2014 against Sri Lanka in an ODI match at Ranchi, Jadhav has played 73 ODIs and nine T20Is for India. He also developed into a part-time bowler for the Men in Blue.

Whenever the team struggled for wickets, the skipper turned to Jadhav to roll his arm over in search of crucial breakthroughs. At the same time, Jadhav says he was scolded by Dhoni.

“But his scolding was often through his eyes. And when he does that, I know I have to pull up my socks," Jadhav said.

Jadhav, who is an ardent Salman Khan fan, was put in a spot when he was asked to choose between MS Dhoni and Salman Khan.

In reply, Jadhav said, "Both are superstars. I met MS Dhoni and he is the reason for the duration have played, but I have not met Salman Bhai. So it is difficult to choose between them. It is like asking one to choose between mother and father."