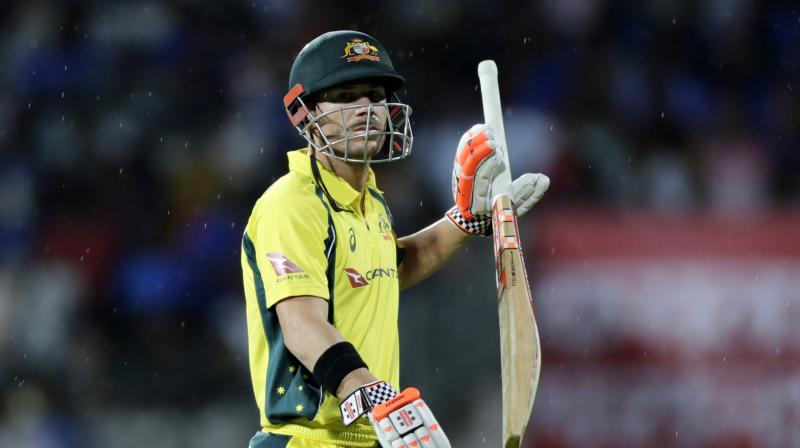 Auckland: Australia completed the highest run chase in Twenty20 history to beat New Zealand by five wickets and maintain their unbeaten record in the T20 tri-series in Auckland on Friday.

In a roller-coaster match, the Black Caps set an imposing target of 244 on the back of opener Martin Guptill’s century but the Australians overhauled it with seven balls to spare.

A combination of Eden Park’s short boundaries and a flat pitch produced a batsman’s paradise that frustrated bowlers from both sides and set records tumbling.

Australia’s total of 245/5 exceeds the previous record chase of 244 scored by India against the West Indies in 2016.

It took his international T20 career total to 2,188 runs, surpassing compatriot Brendon McCullum’s 2,140, with India’s Virat Kohli the next highest on the all-time list with 1,956.

Guptill’s 49-ball century was New Zealand’s fastest T20 ton and the team total of 243 equalled the highest posted by the Black Caps.

The match also had its share of bizarre moments, including New Zealand batsman Mark Chapman’s dismissal, when a fizzing Billy Stanlake ball knocked off his helmet and sent it rolling into the stumps.

The umpires also ordered Black Cap seamer Ben Wheeler out of the attack after two high no-balls, with the unfortunate bowler conceding 64 runs off 3.1 overs.

Flying start
Australia have already reached the series final in Auckland next Wednesday, with four wins from four in preliminary matches.

New Zealand’s hopes of reaching the decider now rest on their meeting with England in Hamilton on Sunday.

Guptill plundered nine sixes and six fours after New Zealand won the toss and elected to bat, supported by fellow opener Colin Munro, who made 76 off 33 balls.

Australia made a flying start in reply, with openers David Warner and D’arcy Short racing to 51 without loss after four overs.

Warner’s half century came off just 20 balls and the partnership reached 121 before spinner Ish Sodhi bowled the Australian captain on 59.

His departure did not slow down Short, who anchored the innings with 76 from 44 to earn the man-of-the match award.

He said the Australians were not overawed chasing such a large total.

“We have the firepower to do it, we knew that,” he said.

“We knew we had to go out hard and get ourselves a start and everyone had to get going when they came in.”

New Zealand’s bowlers produced a nervy display that did not help their cause, conceding 18 wides.

But captain Kane Williamson refused to be too critical of his attack after a run-fest that featured 32 sixes over both innings.