Rishabh Pant eases pressure on himself with maiden ODI fifty

Pant’s six-hitting ability makes him an asset in limited-overs cricket and the youngster has been earmarked as MS Dhoni’s natural successor. 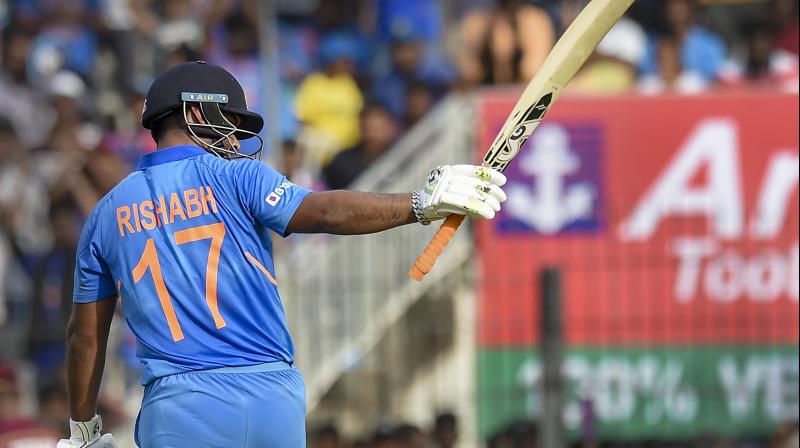 India’s Rishabh Pant has received a lot of criticism due to a dip in batting form and shoddy glovework but the 22-year-old showed his worth with a matured knock against West Indies in the opening one-day international at Chennai on Sunday. (Photo: PTI)

Mumbai: India’s Rishabh Pant has received a lot of criticism due to a dip in batting form and shoddy glovework but the 22-year-old showed his worth with a matured knock against West Indies in the opening one-day international at Chennai on Sunday.

Pant’s six-hitting ability makes him an asset in limited-overs cricket and the young stumper-batsman has been earmarked as Mahendra Singh Dhoni’s natural successor for India when the former captain eventually hangs up his gloves.

He has, however, been panned by India’s coaching staff, pundits and the media in the past few months for his penchant for throwing away his wicket through loose shots.

Pant, who also lost his position in the India test side to Wriddhiman Saha, showed much better application during his 69-ball 71 on Sunday against the Caribbean side for his maiden half-century in the 50-over format.

“As a child, I used to think I should play my natural game. But since the time I started playing international cricket I have learnt there is nothing called a natural game,” Pant told reporters after India’s eight-wicket loss.

“You have to play according to the situation or according to what the team demands. A good player is one who can mould his game accordingly.”

Walking in with India struggling on 80 for three, Pant did exactly that against West Indies. He curbed his natural attacking instincts and waited to punish the poor balls but still managed to score at a brisk rate.

The left-handed batsman added 114 for the fourth wicket with Shreyas Iyer that allowed India to put up a competitive total for West Indies to chase.

“The talk that goes around, they’re sometimes good and sometimes not. But at the moment I only want to concentrate on my game,” Pant said.

Pant played 11 tests in the absence of the injured Saha and used his chances well, hitting a century in an Oval test against England last year while smashing an unbeaten 159 versus Australia in Sydney in January.

But applause has made way for criticism in recent months with his lack of runs and missed opportunities behind the stumps and spectators have often attempted to tease him with chants of Dhoni’s name.

While Dhoni has been the subject of intense speculation on his retirement from international cricket since India’s semi-final exit from the World Cup, the veteran cricketer has not hinted what his plans are.

“I was trying to improve myself every day but I was not getting there. It’s my learning curve,” Pant said. “I will always tell a person that you have to believe in yourself. It doesn’t matter what people say around you.”