Australia dominated the series-opener with a commanding 296-run victory inside four days, despite losing Josh Hazlewood. 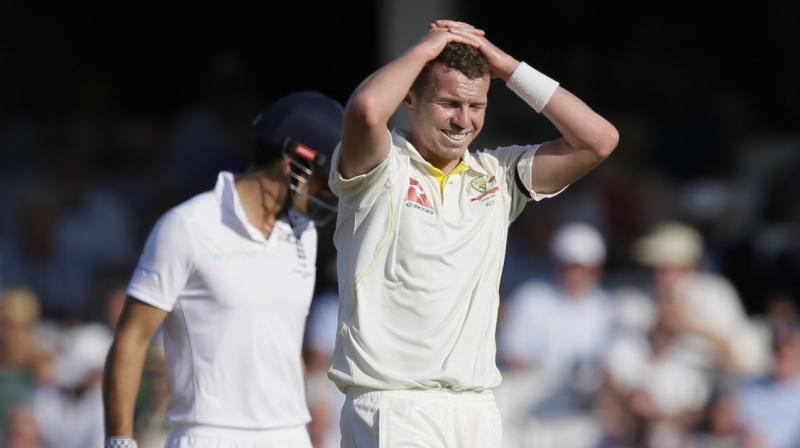 Peter Siddle could be in for a surprise recall for the Boxing Day test against New Zealand as Australia considers deploying a five-pronged attack on what is expected to be a benign Melbourne Cricket Ground (MCG) pitch. (Photo:AP)

PERTH: Peter Siddle could be in for a surprise recall for the Boxing Day test against New Zealand as Australia considers deploying a five-pronged attack on what is expected to be a benign Melbourne Cricket Ground (MCG) pitch.

Australia dominated the series-opener with a commanding 296-run victory inside four days, controlling the contest throughout and dismissing New Zealand for 166 and 171 despite losing Josh Hazlewood for the majority of the day-nighter.

The tall quick started the match at Perth Stadium spectacularly with the wicket of Jeet Raval but suffered a low-grade hamstring tear in his second over and did not bowl again.

Hazlewood has been ruled out of the second test and the reserve seamers in the squad, James Pattinson and Michael Neser, will be the frontrunners to replace him.

Australia coach Justin Langer will name a squad replacement for Hazlewood on Tuesday, however, and said 35-year-old Siddle was in the frame having taken 12 wickets at 15.16 for Victoria in three Sheffield Shield matches at the MCG this season.

“The obvious (replacement) would be Peter Siddle actually,” Langer said on Sunday.

“He did a really good job in the Ashes, he’s bowling very well for Victoria and it’s at the MCG where he’s played a lot of cricket.”

Siddle’s hopes of adding to his 67-test tally could be boosted by Australia contemplating unleashing four quicks along with spinner Nathan Lyon if the MCG pitch looks like offering as little as it has for bowlers in recent tests.

“If the wicket’s like it’s been in the last few years ... we’ll think about it (playing five bowlers), we’ll have a look at it,” Langer said.

Pattinson is also a Victorian and therefore familiar with the MCG, while the uncapped Neser is an all-rounder who could offer a bit of batting depth in a team with a five-pronged attack.

Head made 56 in Australia’s first innings in Perth in his first half-century since the first Ashes test in August but scored just five in the second.

Wade fell cheaply for 12 and 17 against New Zealand and was hit several times on the body by firebrand quick Neil Wagner, who persisted with aggressive short-ball tactics throughout the match.