The duo shared a decisive 218-run stand for the second wicket after the fall of Sunil Ambris in the fifth over. 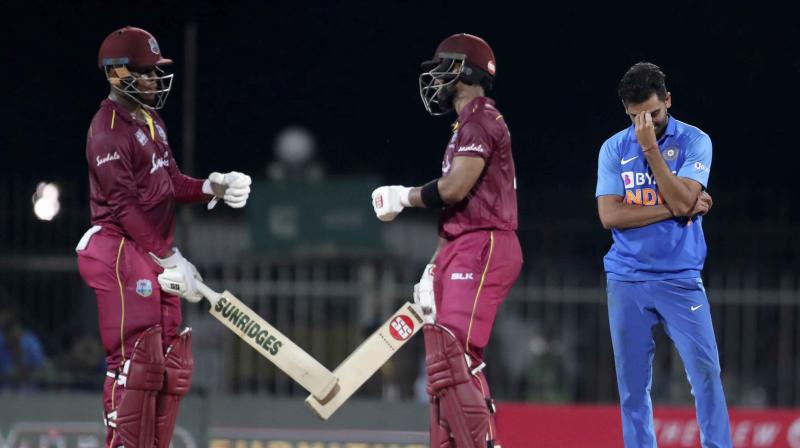 Chennai: Shimron Hetmyer smashed a career-best 139 ahead of next week's IPL auction, toying with an ordinary-looking Indian attack to set up an eight-wicket win for West Indies in the ODI series opener here on Sunday.

The duo shared a decisive 218-run stand for the second wicket after the fall of Sunil Ambris in the fifth over.

India had recovered to 287 for eight after being put in to bat with Shreyas Iyer (70 off 88) scoring his third consecutive half-century and Rishabh Pant (71 off 69) returning to form to silence his critics.

The lack of a specialist fifth bowler hurt India as the combination of debutant Shivam Dube (0/68 in 7.5 overs) and Kedar Jadhav (0/11 in one over) leaked 79 runs in 8.5 overs overs.

Hetmyer was unstoppable en route to his fifth ODI century, smashing as many as seven sixes including the one that hit the roof. Most of his big hits went sailing over the deep mid-wicket boundary.

Hope gave solid support to Hetmyer and deservingly completed his eighth ODI hundred. Another talented southpaw like Hetmyer, Nicholas Pooran (29 not out off 23), hit back-to-back boundaries to register a memorable win for West Indies.

The second game of the three-match series will be played in Visakhapatnam on Wednesday.

Earlier, Pant struck his maiden half-century at M S Dhoni's spiritual home to silence his critics as India shrugged off a poor start to post a competitive total.

Iyer, who is emerging as a solid number four, and Pant paired up for a 114-run stand for the fourth wicket after India lost opener K L Rahul (6) and skipper Virat Kohli (4) in the seventh over of the innings.

Rohit Sharma (36 off 56) too struggled on a slow surface before Iyer and Pant resurrected the innings with their gritty partnership.

A quickfire half-century partnership between Kedar Jadhav (40 off 35) and Ravindra Jadeja (21 off 21), who batted ahead of debutant Shivam Dube, provided the thrust in the slog overs.

Left-arm paceman Sheldon Cottrell (2/46 from 10 overs including 3 maidens), Keemo Paul (2/41) and Alzarri Joseph (2/45) were among the wickets for the visiting team.

The home team appeared to be in a spot of bother at 80 for three in the 19th over on a sluggish pitch when Iyer and Pant came together. After taking their time to get going, the two played some splendid shots and were not afraid to hit the ball in the air when the opportunity presented itself.

The fact that the first six of the innings came in the 28th over when Pant smashed offie Roston Chase over mid-wicket was an indicator of the slow proceedings.

Iyer displayed his class as he came up with some lovely cuts against the spinners-Chase and leggie Hayden Walsh. Pant, on his part, showed patience and hit some powerful shots after gaining in confidence and assessing the nature of the pitch.

The two handled the spinners well and hit a six each apart from some well-timed drives. Iyer perished after a well-made 70 with his dismissal coming against the run of play, when his flick landed in the safe hands of Pollard off Joseph's bowling, ending a brilliant 114-run fourth-wicket partnership with Pant.

Pant fell going for a big hit, caught by Hetmyer in the deep of Pollard's bowling. It was a much-needed knock for an under-fire Pant, who is seen as Dhoni's heir apparent.

Then the duo of Jadeja and Jadhav, who both play for Chennai Super Kings under Dhoni in the IPL, joined hands for a crucial 59-run stand for the sixth wicket during the course of which they batted judiciously and ran well between the wickets.

While Jadhav holed out to Pollard off Paul, Jadeja was run out. Jadeja was beaten by a Roston Chase throw but was initially not given out. An appeal by a West Indian fielder resulted in the on-field umpire going upstairs, following which the Indian southpaw was declared out.

India got off to a slowish start as Sheldon Cottrell bowled two maiden overs to start with and Jason Holder did not give away much as the openers Rohit and Rahul chose to play cautiously.

After Rahul's dismissal, Kohli walked in to a roar from the Chepauk crowd and played an imperious on-drive off the fourth ball he faced. In an anti-climax, he fell the next ball, bowled off the inside edge as he tried to run one from Cottrell down to the third-man area.

Rohit gained in confidence and scored a couple of boundaries including a superb straight drive off Holder in the 10th over. He appeared set for a big score before he hit Joseph's first ball in the match tamely to Pollard at mid-wicket to be dismissed for 36 (56 balls, 6 fours).