While England are buoyed at home by the comforts of the Dukes ball and conditions that often assist quick bowlers. 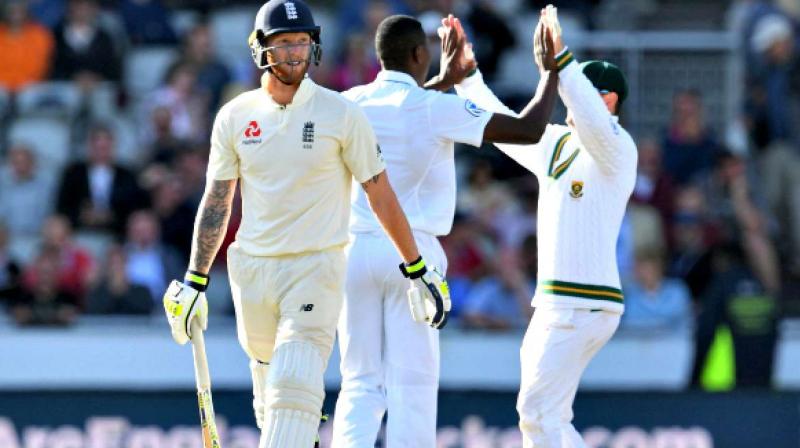 How do England score enough runs and take 20 wickets a match to be a competitive Test side away from home? These are the stark questions confronting Joe Root's men ahead of a four-Test tour of South Africa. (Photo:AFP)

London: How do England score enough runs and take 20 wickets a match to be a competitive Test side away from home? These are the stark questions confronting Joe Root's men ahead of a four-Test tour of South Africa.

While England are buoyed at home by the comforts of the Dukes ball and conditions that often assist quick bowlers, a combination of the far less bowler-friendly Kookaburra ball and flatter pitches they often encounter overseas has made them far less of a threat.

Significantly, in the broadly similar conditions of Australia, New Zealand and South Africa, England have bowled out their opponents twice on only three occasions in 21 Tests during the past six years.

But while teams must take 20 wickets to win a Test, they also need their batsmen to score sufficient runs.

England, until the second and final match of their losing Test series in New Zealand, had not managed the benchmark total of 400 in the first innings of a Test anywhere since 2017.

County Championship cricket is often blamed for England's Test failings, as is the recent emphasis on the one-day game, with a domestic schedule where first-class matches are pushed to the extremes of the season meaning players no longer get much experience of the kinds of pitches they often encounter overseas.

But the much-maligned Championship provided the springboard for Australia's Marnus Labuschagne to enjoy both a successful Ashes campaign in England and Test success on home soil too after the Glamorgan batsman became the first player in this season's edition to score 1,000 runs.

Following the retirement of Andrew Strauss seven years ago that saw the end of his successful partnership with Alastair Cook, England have struggled to field a reliable first-wicket duo.

Current opener Rory Burns has walked out to bat with five different partners in a Test career barely a year old.

The latest is Dominic Sibley whose maiden Test campaign in New Zealand saw him average a meagre 12.66 in three innings during a 1-0 series loss.

But the drawn second Test in Hamilton did see Root make 226 and Burns 101 -- the first time England have had two century-makers in the first innings since September 2018.

Questions were being asked about whether captaincy was diminishing Root's effectiveness as a batsman given that prior to that Test his average had dropped to 39.70 compared to 52.70 before he became skipper.

His tactics were queried during England's innings and 65-run defeat in the first Test, with genuine quick Jofra Archer, still a Test novice, bowling a marathon 42 overs in an innings defeat.

Archer finished the series with just two wickets at an average of over a hundred but suffered from several dropped chances, the worst coming when Joe Denly floored an utter dolly of a midwicket catch to reprieve New Zealand captain Kane Williamson during the second Test.

The return from a calf injury of James Anderson, England's all-time leading wicket-taker, should bolster the attack but at 37 the paceman's remaining time at the top is limited while longstanding new-ball partner Stuart Broad is 33.

As if that were not enough to be worrying about, England also have concerns over spin bowling -- Moeen Ali is continuing to take a break from Test cricket and England dropped left-armer Jack Leach for the second Test in New Zealand -- and wicketkeeping, with the recalled Jonny Bairstow and Jos Buttler vying for the gloves while the highly regarded Ben Foakes is not even in the squad.

The administrative chaos in Cricket South Africa that has seen chief executive Thabang Maroe suspended and calls for the the board to resign prompted former England captain Mike Atherton to suggest this month that there had "never been a better time to play" the Proteas since their readmission in 1992.

But that was before former South Africa captain Graeme Smith and wicketkeeper Mark Boucher were appointed interim cricket director and head coach respectively and the hosts may now feel there's never been a better time to play England.

England arrive in South Africa on Monday and start their tour with a match against a SA Invitation XI in Benoni on Tuesday.