Indian bowlers have lived up to demands

The single biggest factor in India having a potent attack today is the presence of 6-7 quality fast bowlers to choose from. 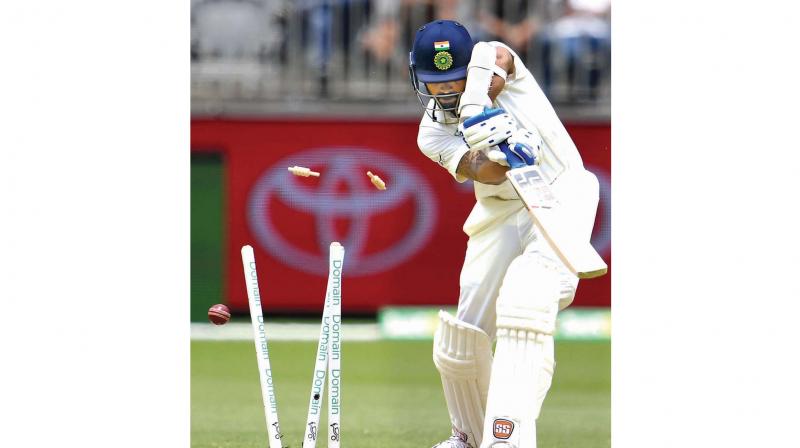 India opener Murali Vijay is castled by Mitchell Starc during the second day of the second Test. (Photo: AFP)

When Tim Paine and Pat Cummins played out the first hour on the second day to take Australia past 300, it seemed India’s bowlers had squandered a splendid opportunity with the second new ball to take a firm grip on the Test.

In recent matches, tail-enders have thwarted India on more than one occasion, but this time Cummins, Starc, Hazlewood and Lyon were not allowed to frustrate the team for long.

Misgivings about the bowling stemmed for two reasons. One is historical. India have been frustrated by the opposition’s lower order so often that it is often joked that the real threat to them starts after frontline batsmen have been dismissed.

The second has to do with greed for constant success from the bowlers, especially pacemen. This is a newfound expectation and the more pertinent in the current context.

For instance, in the 12 Tests India have played this year (till the Adelaide match) they’ve won six. This can’t happen unless the bowling is effective enough to claim 20 (or thereabouts) opposing wickets.

True, three of these 12 Tests were played at home, one against Afghanistan, two versus West Indies. Neither is a strong side so there is no surprise in the results or the inevitable success. But the margin of victories was emphatic.

The more relevant part of the scrutiny, however, is about how the bowlers have fared away from home.

On the face of it, the results are not so gratifying — six defeats from nine matches — but the fault does not lie with the bowling, rather the batting which frequently let the team down.

If anything, the study shows up just how wonderful the bowling has been. Apart from bundling opponents out twice in all three home matches, India achieved such success seven times in nine overseas matches too, which is quite a dramatic departure from the past.

In three Tests in South Africa, India picked up 60 wickets, at Adelaide in the first Test of the ongoing series they picked up 20. In England the success was not so comprehensive, yet 85 out of 100 wickets is remarkable considering India lost the series 1-4!

Overall, India bowling have taken 225 out of 240 wickets in completed Tests this year. This is a tremendous strike rate, made even more remarkable as many of these have been picked up by fast bowlers.

Between them, the pace bowlers accounted for a whopping 184 wickets. This was unthinkable even 3-4 years back when the accent was still on spin, even when playing overseas.

Before the Perth Test, Mohammed Shami led the 2018 tally with 38 wickets, Jasprit Bumrah had 34, Ishant Sharma 33, Umesh Yadav 18, Hardik Pandya 13 and Bhuvneshwar, who hasn’t featured in the playing XI since South Africa, 10.

The three main bowlers have been Ishant, Shami and Bumrah, but the others have also delivered when chosen showing the bench strength that exists in Indian cricket where pace bowling is concerned.

Of the lot, my pick is Bumrah who made Test his debut in South Africa only this year and within such a short span has emerged as not just the India’s leading bowler (he missed a couple of matches in England), but among the most threatening in the world with his sharp pace, awkward action, splendid control and ability to swing and seam the ball both ways.

Internecine competition has made these bowlers perform better for a place in the playing XI is not easily got. All are also of different types. This adds to the variety and increases the difficult quotient for opposing batsmen.

The single biggest factor in India having a potent attack today is the presence of 6-7 quality fast bowlers to choose from. Kapil Dev was unarguably India’s greatest fast bowler. He hardly had adequate support and India’s bowling seldom looked threatening overseas.

If India have still not been able to win as often this year as the promise held out, it is not because of bowlers, but the profligacy of the batsmen who underperformed.

In the series Down Under so far, the bowlers have lived up to the high demands made on them. If the batting too delivers this time, there will be a splendid chapter to add to Indian cricket history.