England sparkled with 4 centuries (Cook, Joe Root, Moeen Ali and Ben Stokes), as India clung on for a tense draw in the Rajkot Test. 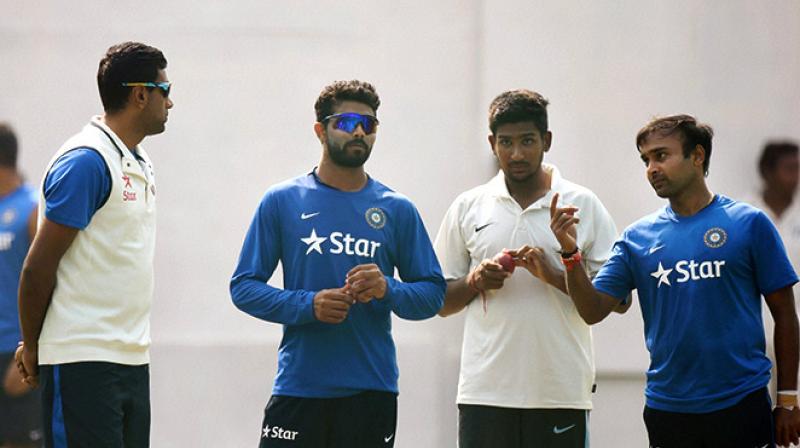 There had been questions marks over the quality of England's slow bowlers before the game but they outperformed their Indian counterparts with leg-spinner Adil Rashid taking seven wickets. (Photo: PTI)

Vishakhapatnam: India's much-hyped spin attack are under pressure to deliver in the second Test at Vishakhapatnam starting Thursday against an England side high on confidence and boasting new teenage sensation Haseeb Hameed.

Nineteen-year-old Hameed, dubbed "Baby Boycott" for his unflappable style akin to batting great Geoffrey Boycott, scored 31 and 82 on debut during last week's drawn first Test, the latter the highest by a teenager for England.

He shared a 180-run second innings opening stand – a record for England in India – with captain Alastair Cook, who made 130, as the homes side's spinners endured a torrid start to the five-Test series.

India's spin trio of Ravichandran Ashwin, the world's top-ranked bowler, Ravindra Jadeja and Amit Mishra had been expected to rip through England's batting line-up but wilted in the Rajkot heat.

The tourists sparkled with four centuries – from Cook, Joe Root, Moeen Ali and Ben Stokes – as the hosts clung on for a tense draw, losing six wickets on the final afternoon after being set a notional 310 to win.

There had been questions marks over the quality of England's slow bowlers before the game but they outperformed their Indian counterparts with leg-spinner Adil Rashid taking seven wickets.

"Our batters played well against their spinners, and our spinners and seamers all bowled well. The way the guys played in this Test should give us plenty of confidence," said England coach Trevor Bayliss after the first match finished on Sunday.

England's strong showing against the top-ranked Indians banished memories of last month's defeat to minnows Bangladesh when they were undone by rookie spinner Mehedi Hasan.

However, the pitch at the Visakhapatnam ground in Andhra Pradesh state is expected to be more favourable to India's spinners than Rajkot's flat and grassy track.

"We're under no illusions that these next four Tests could be even tougher," said Bayliss.

England could include leading wicket-taker James Anderson, who has recovered from a shoulder injury, while India are also set to make changes.

Opener Lokesh Rahul was added to the squad on Tuesday after proving his recovery from a hamstring injury sustained while batting against New Zealand last month by scoring a century in a domestic fixture on Monday.

He looks certain to return to the top of the order to replace Gautam Gambhir who struggled in Rajkot with scores of 29 and 0.

All-rounder Hardik Pandya could make his debut and add pace to India's attack.

"We can still play an extra bowling option and keep putting pressure on the opposition," said captain Virat Kohli.