Star paceman Anderson may have to wait before playing his comeback game, as Woakes’ injury is not severe. 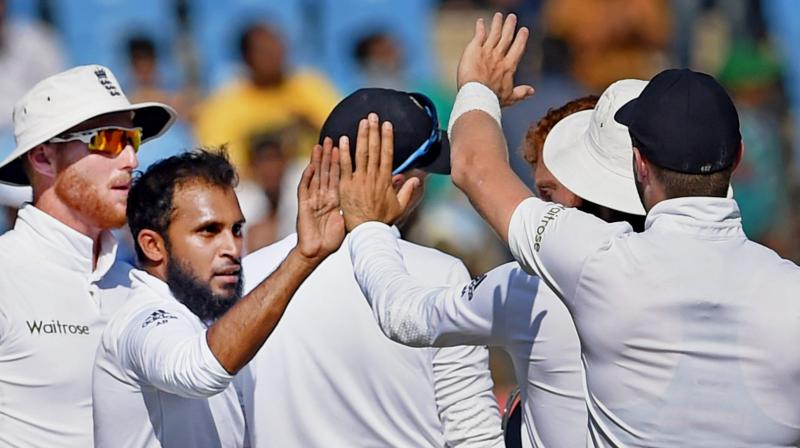 Apart from the spin trio, the English have an edge in their bowling department with a three-pronged pace attack in Stuart Broad, Chris Woakes and Ben Stokes. (Photo: PTI)

Visakhapatnam: English captain Alastair Cook is confident that his team's "inexperienced" spinners will continue to trouble the highly rated Indian batting line-up in the second Test beginning on Thursday.

The English spin troika of Moeen Ali, Adil Rashid and Zafar Ansari, who are under the tutelage of Pakistani great Saqlain Mushtaq, out-bowled their Indian counterparts in the drawn first Test in Rajkot.

"If you continue in that level like in Rajkot then there is no reason why we can't put pressure on Indian batting with our spinners," the English captain said on the eve of second Test.

"Unfortunately we didn't quite get over the line but we start afresh 0-0 at the start of the second Test. And we are here to give India a run for their money."

Showering praise on the spin trio, he said: "They bowled excellently as a group of three spinners. Everyone came to the party and they took a massive step forward from where they operated in Bangladesh.

Apart from the spin trio, the English have an edge with their bowling with a three-pronged pace attack in Stuart Broad, Chris Woakes and Ben Stokes.

"It's great we have got that balance of seamers as well. Six bowlers in these conditions give me a lot of balance as captain. If there is a dodgy few overs, we can change it up. We are not relying on four bowlers. Everyone of those guys contributed and the challenge is now come and do it again."

New Zealand were shot out for 79 at this same venue two weeks ago with spinners ruling the roost.

"I think judging on statistics here everyone is telling us the pitch will turn more and more as the game goes on so the toss is important but it does not guarantee anything.

"If we happen to lose the toss then it happens to be another challenge that we have to try and overcome. Certainly an advantage in these conditions to bat first. Hopefully Virat winning seven in a row, he's got a few to lose," Cook said in a lighter vein.

English pace spearhead James Anderson is available for selection after recovering from a shoulder injury but it appeared unlikely that he would be named in the eleven.

Chris Woakes has a slight niggle but Cook said it is just a little wear and tear, which may mean Anderson may have to wait.

"That is the kind of the question we have got to ask ourselves. Jimmy has come over and done really well in the nets.

"Last time he bowled in a game was in August so we kind of weigh that up with a couple of guys who have been out here for seven weeks or so. Just now we are going in with a few heads with what we are going to do," said Cook.

With four hundreds in two innings, England put up a solid show with the bat in Rajkot.

"The way we played was particularly pleasing over the five days we were really relentless with our game. Couple of dropped catches here and there but does happen in every game but apart from that we were excellent with the ball," Cook added.