Pacer Broad on song as England beat Oz to make it all square at the Oval. 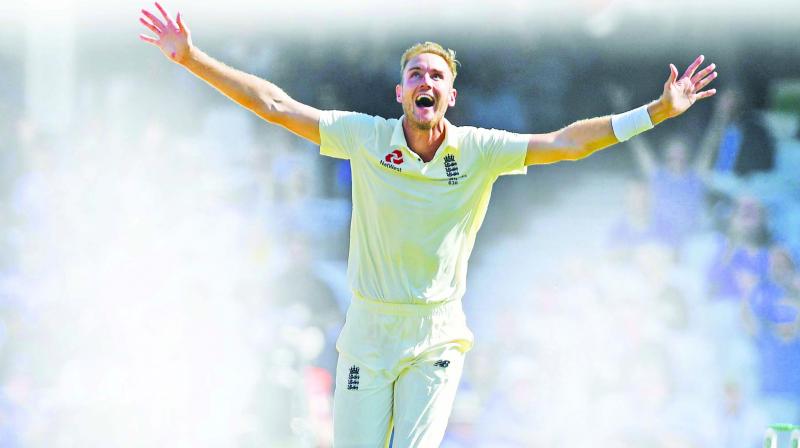 London: England won the fifth Ashes Test by 135 runs on Sunday to level the five-match series with Australia at 2-2.

The tourists were set an unlikely 399 to win but despite a century from Matthew Wade, they were bowled out for 263, with Stuart Broad and Jack Leach taking four wickets each.

Earlier, Steve Smith was dismissed for just 23 as England closed in on a series-levelling victory. While the former captain was at the crease, Australia retained a faint hope of chasing down a daunting target.

But when Ben Stokes dived to his left at leg slip to catch Smith off paceman Stuart Broad, England knew they had removed the last serious obstacle in their victory charge.

At the tea interval Australia, who have already retained the Ashes, were 167-5, with the final session of the fourth day to come plus a full day on Monday.

Matthew Wade was not out 60 and captain Tim Paine unbeaten on 10. Smith, who scored an astonishing 774 runs in just seven innings, was out for a score of less than fifty for the first time in the series. The Oval crowd gave him a standing ovation as he walked back to the dressing room in the September sunshine, with Australia in deep trouble at 85-4 in the post-lunch session.

Earlier, England added 16 runs to their overnight tally, with Jofra Archer and Jack Leach the last men out.

Broad then pounded in, roared on by a packed crowd, who raised the roof when he demolished Marcus Harris’s off-stump in the fifth over of the Australian innings.

In his following over, Broad ended David Warner’s miserable series, with the opener edging him to Rory Burns in the slips and departing for 11.

The attacking batsman, who was booed after his dismissal for his part in the cheating scandal, scored just 95 runs in 10 innings and was dismissed by Broad seven times.

Warner’s dismissal brought Smith to the crease and he opened his account with a sweet drive through the covers for four off Archer.

Smith and Marnus Labuschagne took the score to 56 before off-spinner Jack Leach beat the outside edge of Labuschagne’s bat and Jonny Bairstow whipped off the bails to complete a sharp stumping.

Smith’s exit led to one or two isolated boos but they were drowned out by applause from the crowd in appreciation of his run-scoring feats during the summer. His 774 runs put him fifth on the list of highest tallies in an Ashes series behind Don Bradman’s two entries, England’s Wally Hammond and former Australia skipper Mark Taylor.

All-rounder Mitchell Marsh was caught in the slips by Burns off a Chris Woakes delivery but was reprieved when replays showed it was a no-ball.

But he was out for 24 after prodding the ball into the hands of Jos Buttler at short leg off the bowling of Root.