When Sharma got to three figures, India were 172 for one in the 31st over and set for a huge total at Old Trafford. 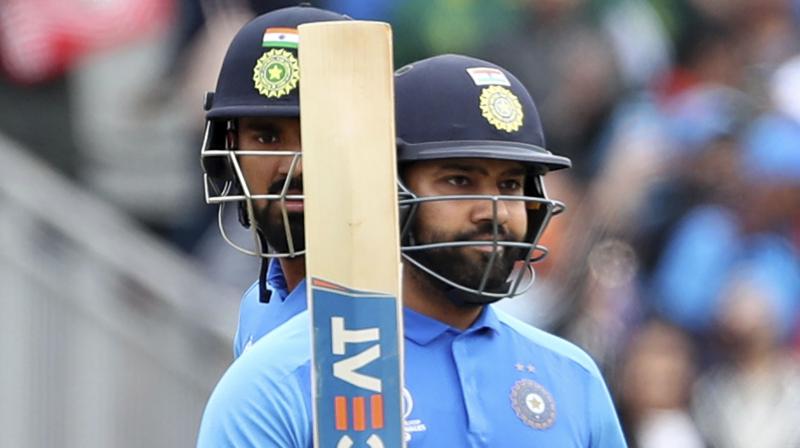 Sharma, who made 122 in India's opening win over South Africa and 57 against Australia, went to fifty in just 34 balls against Pakistan. (Photo: AP)

Manchester: Rohit Sharma hit his second hundred in three innings in this World Cup to put India in a dominant position against arch-rivals Pakistan on Sunday.

When Sharma got to three figures, India were 172 for one in the 31st over and set for a huge total at Old Trafford.

Sharma and KL Rahul (57) put on 137 for the first wicket after India lost the toss in Manchester.

Their efforts were all the more impressive as they were opening together for the first time in a one-day international.

Regular opener Shikhar Dhawan was sidelined with a thumb injury sustained while making a century in a victory over champions Australia last time out.

Sharma, who made 122 in India's opening win over South Africa and 57 against Australia, went to fifty in just 34 balls against Pakistan.

He got there in style with a six over long-on and a cut four, off successive deliveries from recalled leg-spinner Shadab Khan.

Rahul also brought his fifty up with a six against Shoaib Malik and drove one more off Mohammad Hafeez.

But he fell soon afterwards to Wahab Riaz who, as happened twice to fellow left-arm quick Mohammad Amir earlier in the innings, was warned for running on the pitch.

Two balls after that sanction from umpire Marais Erasmus, Riaz -- now bowling from around the wicket -- had Rahul chipping a tame catch to mid-off.
But Sharma carried and he went into the 90s with an extraordinary square-cut six over paceman Hasan Ali.

Then a single off Shadab saw Sharma to a hundred off 85 balls including three sixes and nine fours. It was his 24th ODI century.

Earlier, Amir was warned by Australian umpire Bruce Oxenford in the third and fifth overs.

One more such warning for running on the pitch would see him unable to bowl again in this fixture. That would be a huge blow to Pakistan, with the in-form Amir having taken career-best figures of 5-30 in a 41-run loss to Australia at Taunton on Wednesday.

Despite the warnings, Amir conceded just eight runs in his first four overs after Pakistan captain Sarfaraz Ahmed ignored a plea from prime minister Imran Khan -- the skipper of Pakistan's 1992 World Cup winning side -- to bat first if he won the toss.

Pakistan are currently ninth in the 10-team table and realistically need to beat India if they are to maintain their hopes of a top-four finish from the round-robin group stage that will see them into the semi-finals.