Glenn Maxwell then provided the late charge with an unbeaten 25-ball 46 as Australia posted a challenging 334 for 7. 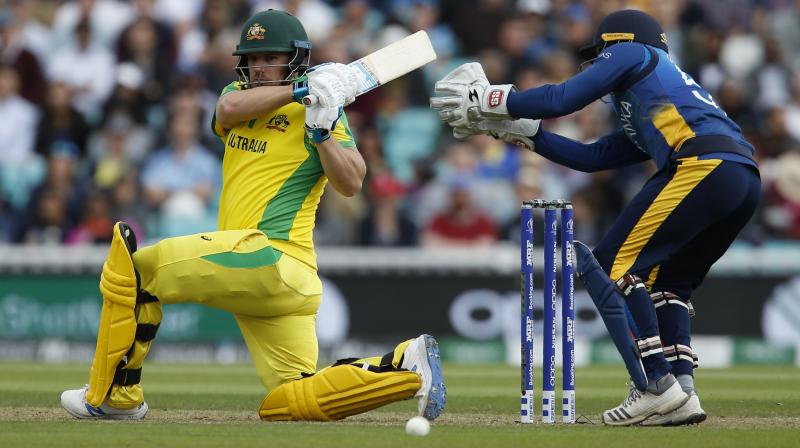 London: Skipper Aaron Finch stroked his way to a majestic century as defending champions Australia inched closer to the semifinal berth with a crushing 87-run win over Sri Lanka in their World Cup fixture here Saturday.

Glenn Maxwell then provided the late charge with an unbeaten 25-ball 46 as Australia posted a challenging 334 for 7.

Chasing the total, Sri Lanka were 115 for no loss at one stage but they squandered the superb start to be eventually dismissed for 247 in 45.5 overs.

Skipper Dimuth Karunaratne (97) was the top-scorer for Sri Lanka, while his opening partner Kusal Perera (52) also scored a fifty.

This is Australia's fourth win in five matches, having beaten Afghanistan, the West Indies and Pakistan while losing to India in the 10-team tournament.

Sri Lanka, who came into the match with one win from four games after their previous two matches were washed out, are however running out of time after suffering their second defeat.

Sri Lanka were off to a flying start to their runchase with Karunaratne and Kusal Perera helping the team post 87 for zero in 10 overs, the highest total in the powerplay in the tournament so far.

The Island nation scored 100 in 12.4 overs before Mitchell Starc produced a breakthrough, cleaning up Perera in the 16th over.

Lahiru Thirimanne (16), who survived a couple of run-out chances, brought up the team 150 with a square drive but he was caught behind in the next ball by Jason Behrendorff as Sri Lanka slipped to 153 for 2.

Runs dried up after that as Australia tightened the screws. With pressure mounting, Karunaratne ended up giving a straight catch to Maxwell at gully, just three runs short of his hundred.

Two quick wickets next saw Sri Lanka further slump to 209 for five and they never recovered after that.

Earlier, Finch played some exquisite shots to keep the runs flowing even as his opening partner Warner found the going tough.

Nuwan Pradeep was first in the firing line as he was hit for two fours by Finch.

The Australia skipper then blasted Lasith Malinga for a couple of fours in the seventh over before welcoming Thisara Perera with successive boundaries as Australia scored 53 in the first powerplay.

In the 17th over, Dhananjaya de Silva cleaned up Warner when he tried to make room for himself to play a cut shot.

Finch and Usman Khawaja (10) took Australia to hundred in 23rd over but the left-handed batsman perished soon after his sweep shot was caught by Isuru Udana at deep midwicket.

Smith then joined hands with Finch, who exploded in the 29th over, smashing de Silva out of the park twice besides a boundary to amass 20 runs off the over.

Smith too dealt in boundaries as the duo brought up the 200 in 35.3 overs.

The former skipper completed his fifty in 46 balls, while Finch smashed Perera over deep square for his fifth six of the innings.

Finch and Smith carted Perera for 18 runs in the 41st over with each smashing a couple of fours. Smith then deposited Malinga over deep mid-wicket in the next over.

Udana finally broke the partnership when he had Finch caught at cover by Karunaratne off a slower delivery as Australia slipped to 273 for 3 in 42.4 overs.

Malinga then dismissed Smith with a cracking yorker in the next over, while Udana showed great athleticism to run out Alex Carey and Pat Cummins to stem the run flow.