With this win, they have set up a final showdown against Pakistan at The Oval on Sunday. 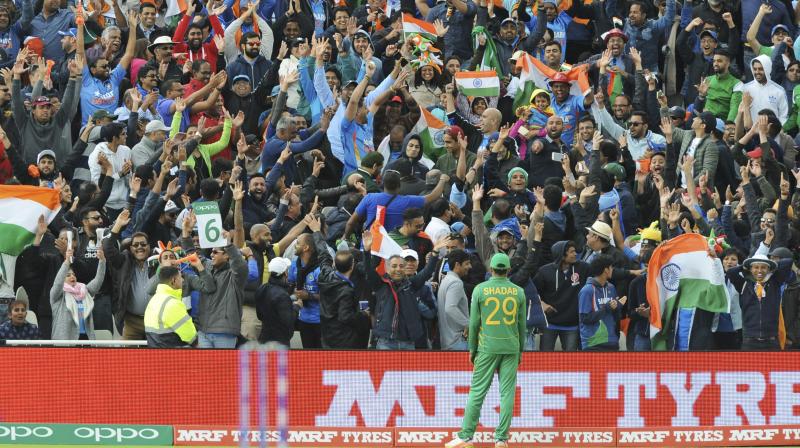 India earlier played Pakistan in the group stage, in which they won convincingly by 124 runs.(Photo: AP)

Birmingham: India thrashed Bangladesh by 9 wickets in the semifinal of the ICC Champions Trophy, at the Edgbaston Cricket Ground, in Birmingham, on Thursday.

With this win, they have set up a final showdown against Pakistan at The Oval on Sunday. India earlier played Pakistan in the group stage, in which they won convincingly by 124 runs.

Sarfraz Ahmed’s men, though, have been a surprise entrant to the final, starting the tournament as underdogs, but knocking out England in the semifinal.

Looking ahead to the big final, we look at some of the past ODIs between these teams.

This was the inaugural edition of the Australasia Cup, where India, Pakistan, Sri Lanka, Australia and New Zealand participated.

India and Pakistan faced off in the final at Sharjah on April 18. Pakistan, after having elected to field, restricted India to 245/7. In reply, Pakistan won the final with a thrilling one-wicket victory over their arch rivals. Even though the most of the Pakistan team failed to contribute, it was Javed Miandad all the way as he helped his side earn a famous win, finishing with a magnificent six off a full toss from Chetan Sharma.

India came into this match having lost just two games in the group stage, against Australia and Sri Lanka.

Coming into the match, India won the toss and decided to bat, posting a defendable total of 287/ 8. Navjot Singh Sidhu top scored with 93, with Ajay Jadeja scoring 45.

Pakistan, in reply, struggled through their way as they lost wickets at regular intervals and finished their innings at 248/9, as Aamer Sohail top-scored with 55.

This win ensured India’s place in the semifinals, where they eventually lost to Sri Lanka.

This was without doubt one of India’s most successful World Cup campaigns. Playing their last group game against Pakistan, India came to this match having lost just one match against Australia in the league stage.

After winning the toss, the Men in Blue put Pakistan in to bat first. Pakistan lost wickets early into the match, but opener Saeed Anwar’s 174-ball 101 ensured Pakistan post a total of 273/7.

India too, lost a couple of wickets at the start but a hundred run partnership between Sachin Tendulkar and Mohammad Kaif proved crucial in the run chase. In the end, India finished the match in the 46th over, winning by 6 wickets. Sachin Tendulkar was adjudged Man of the Match for his 98, as he just fell 2 runs short of a century.

Twelve teams competed in this edition of the tournament in England, as teams were divided to four groups of three teams each. India were grouped with Kenya and Pakistan.

Both teams defeated Kenya in their first matches, and this match was a decider, as the winner would advance to the semifinals.

India’s performance was below par, and nobody got the innings going, as they lost wickets right from the first over. However, Rahul Dravid (67) and Ajit Agarkar(47) helped India post 200.

Pakistan, too, started losing wickets from the first over, but Yousuf Youhana’s (now Mohammad Yousuf) 81 and a 41 run contribution by Inzamam-ul-Haq took Pakistan home, as they won by 3 wickets.

India came to this World Cup as clear favourites. After having knocked out the then defending champions Australia in the quarter final at the Motera Stadium, it was time to face Pakistan in the semifinal at Mohali. Both teams had very good sides and came into match with high confidence.

India won the toss and elected to bat first. After Virender Sehwag and Gautam Gambhir were the first ones to depart, Sachin Tendulkar held his nerves to score 85, which eventually was the top score of the innings. His innings proved crucial as India posted a total of 260/9 in 50 overs.

During Pakistan’s innings, the Indian bowlers never gave their opponents time to settle, and did the right thing by getting wickets at regular intervals. Misbah-ul-Haq (56) was the top scorer for them as Pakistan lost by 29 runs, thus continuing their winless run against India in World Cups. Each bowler who bowled that day got two wickets each. With this win, India advanced to the final against Sri Lanka, and eventually went on to win their first World Cup in 28 years.