ICC World Cup 2019: Players to watch out for - Rohit Sharma

Sharma currently holds the record for highest individual ODI score(264), which helped India to put a mammoth score of 404 on the scoreboard. 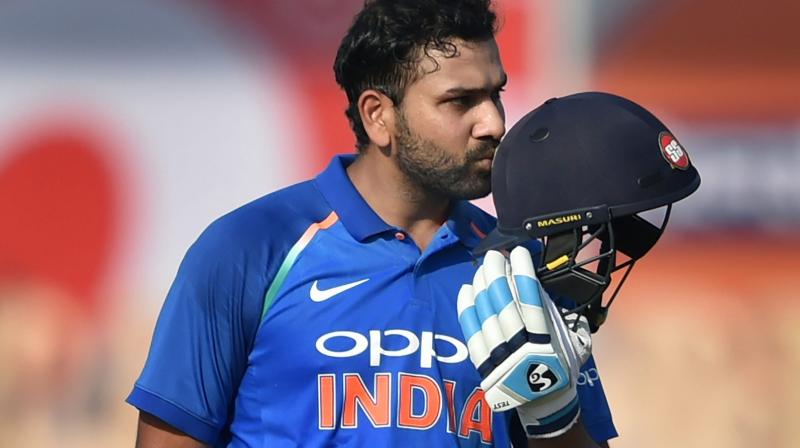 Rohit Sharma joined the league of legends like Sachin Tendulkar and Virender Sehwag by smashing a double century in 2013. (Photo: PTI)

Mumbai: Gifted with hitting the ball with impeccable timing, Rohit Sharma became the most successful captain in the IPL history when he led Mumbai Indians to their fifth IPL trophy on Sunday.

With a career spanning over a decade, the Mumbaikar paved his way to the national side by performing for Mumbai in First-class cricket. Sharma was successful in scoring a double century against Gujarat in the 2006-07 season of the Ranji Trophy.

The 32-year-old broke into the international scene in 2007, when he was given an opportunity against South Africa in the 2007 ICC World Twenty20. He was a last-minute replacement for an injured Yuvraj Singh. Rohit managed to score 50 runs off 41 balls, helping India to win the game and advance to semi-finals of the tournament.

Rohit was shuffled in the team’s middle-order until the Champions Trophy 2013. His career soared after he was given the chance to open the innings alongside Shikhar Dhawan. The opening pair played a prominent role to help India clinch their second Champions Trophy.

Rohit Sharma joined the league of legends like Sachin Tendulkar and Virender Sehwag by smashing a double century in 2013. But the saga did not end there. Sharma hammered his second double century against Sri Lanka in 2014. He achieved the feat of scoring 264 runs in 173 balls, comprising 33 fours and 9 sixes.

Sharma currently holds the record for the highest individual ODI score, which helped India to put a mammoth score of 404 on the scoreboard at Eden Gardens.

Rohit is the only player who has scored three double hundreds in One Day Internationals.

Rohit was snapped up by Deccan Chargers in the first edition of the IPL, but his path shifted towards Mumbai Indians when they acquired him for 2 million dollars in 2011. Rohit made his presence felt in the Indians’ dugout by scoring his first IPL century in 2012. He thrashed 109 runs off just 60 balls against Kolkata Knight Riders and was also awarded Man of the Match trophy.

Rohit’s test career initiated much later than his ODI career. He made his Test debut in 2013, five years after playing white ball cricket. Sharma made an immediate impact by scoring 177 runs at Eden Gardens on his debut against West Indies. He played a crucial role in retrieving the scoreboard as half of the Indian batting line-up had collapsed at the score of 83.

Rohit’s performance earned him the Man of Match trophy as India won by an innings and 51 runs. Furthermore, he hammered another ton in the next match on his home ground – Wankhede and became third Indian to score consecutive centuries in the first two tests.

Rohit Sharma’s career has improved drastically since he was given the responsibility of opening the innings. Rohit’s biggest forte is his ability to integrate his effortless playing style while playing an aggressive knock.

One of the memorable knocks of the right-hander was against England in 2018. Chasing a target of 268, Rohit steered the team’s way by smashing 137 off 114 balls, with 15 fours and 4 sixes. He managed to score two tons in the five-match ODI series.

Rohit is expected to replicate such stellar performances in the World Cup 2019. Batting traditionally has been India’s strength and fans are anticipating that the opening pair of Rohit and Dhawan will work wonders on England’s pitches.

Having an experience of 206 ODIs, Rohit has amassed 8010 runs in his career at an impressive average of 47.39. His illustrious ODI career also consists of 41 half-centuries and 22 centuries.