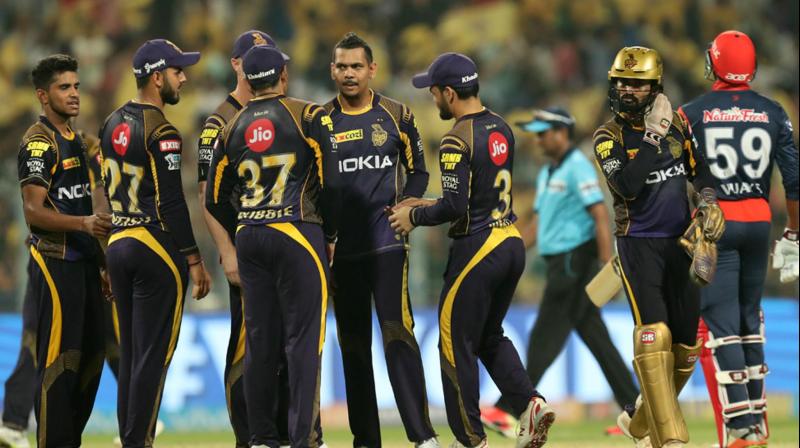 Sunil Narine became only the third bowler to complete 100 wickets in the IPL. (Photo: BCCI)

Kolkata: Gautam Gambhir’s homecoming ended in defeat as Kolkata Knight Riders beat Delhi Daredevils by 71 runs at Eden Gardens on Monday. Sunil Narine and Kuldeep Yadav shared 3 wickets between them to take their team to comfortable victory. Narine also became the third bowler to pick up 100 wickets in IPL history.

Chasing 201 runs for victory, Delhi’s run chase started on disastrous note as in form Jason Roy was dismissed by Piyush Chawl in the very first over. Shreyas Iyer too did not last long at the crease giving away easy catch to Nitish Rana at slip of Andre Russel’s bowling. Gambhir’s stay was short lived as he was bowled by Shivam Mavi leaving Delhi’s run chase in trouble.

Rishabh Pant and Glen Maxwell then put on 62 run stand between them. Once Pant (43 of 36 balls) and Maxwell (47 runs of 22 balls) were dismissed, no other batsmen put up fight as wickets kept tumbling like pack of cards. In the end Delhi were bowled out for 129 runs in 14.2 overs to hand KKR a comfortable win.

WICKET! First Morris and now Shankar, that's two wickets in the over for Sunil Narine.

WICKET! Maxwell's entertaining knock comes to an end. The Australian tries to hit third six on trott to Kuldeep Yadav, but this time he holds it  straight to Uthappa.

With half of the side gone, Delhi batsman will have to dig deep to stand any chance of winning the game. With Maxwell at the crease, Delhi can still hope for a miracle.

WICKET! Tom Curran gets the 5th wicket for KKR, Rahul Tewatia dismissed for just 1 run. This was full and wide and the batsman hits it straight to Russel at short extra cover

WICKET! Oh Oh tats really unlucky for Rishabh Pant.  He looked well set for half century, but hits a short ball from Kuldeep straight into the hands of Chawla at deep mid wicket. Sad ending to a good innnings

Poor start for Daredevils as their top three batsmen Jason Roy, Shreyas Iyer and skipper Gautam Gambhir have all departed without troubling the scorecard. Great bowling by KKR bowlers

WICKET! Shivam Mavi gets the breakthrough. The youngster has picked up the big wicket of Gautam Gambhir . The balls takes the inside edge and hits the stump

WICKET! Shreyas Iyer departs early, another breakthrough for KKR. Russel hitting the deck hard and deviates the ball outside off stump. Iyer pokes at the ball and it takes edge and goes to Nitish Rana at first slip

Nitish Rana scored 59 runs of 38 balls as Kolkata Knight Riders set up Delhi target of 201 runs to win at Eden Gardens in Kolkata on Monday.

The left Hander hit sixes and fours in his explosive innings. Andre Russel also contributed with the bat scoring 41 runs of 12 balls which had 6 sixes.

After been asked to bat, openers Sunil Narine and Chris Lynn failed to provide strong start as Delhi bowlers Trent Boult and Chris Morris kept things tight right from the first over.

Narine was the first to go as he edged Boult delivery straight to wicket keeper Rishabh Pant who deflected the ball to Maxwell in the first slip. Robin Uthappa and Chris Lynn then  went after bowlers especially Shahbaz Nadeem , who was taking the beating from Uthappa. The bowler had the last laugh as he had him caught and bowled for 35 and also broke the 50 run partnership.

With bowlers keeping things tight it looked like Delhi will restrict the host for low score, but West Indian powerhouse Andre Russel had another idea. He went after the bowling attack right from the first ball and along with Nitish Rana , counterattacked the bowlers in the last five overs.  Russel and Rana put up 61 run stand before the West Indian was clean bowled by Boult with old fashion Yorker.

That's the end of KKR innings as Tewatia picks up three wickets in the final over to restrict the host.

WICKET! Andre Russel entertaining knock comes to an end. Trent Boult with the old fashioned yorker that disturbs the timber.

WICKET! Dinesh Karthik's poor run with the bat continues as he manages to score just 19 runs before throwing away his wicket.

WICKET! Chris Lynn has to go back, Shami with the wicket. Lynn couldn't get the timing and hits the ball straight into hands of Jason Roy at long on

After Uthappa onslaught, Nitish Rana continued to play big shots going after spinner Nadeem who finished with figures of 1/43 in his 4 overs.

WICKET! Shahbaaz Nadeem with the big breakthrough for Delhi. Robin Uthappa trying to go for a big shot only to get a top edge as the ball goes high and straight into the hands of Nadeem.

After losing Narine early, Uthappa and Lynn have been playing cautiously and only despatching bad balls to the boundary as Delhi pacers have hardly given them room to free their arms thanks to some tight bowling.

WICKET! Trent Boult with the breakthrough, Narine edges one back to wicketkeeper Pant to deflects it to Maxwell on the first slip.

Trent Boult starts with maiden over for Delhi

Kolkata: Chris Lynn and Sunil Narine will be opening the innings for Kolkata Knight Riders

Here are the final team lineups for this game

Daredevils have won the toss and opted to bowl

It's time for Match 13 of #VIVOIPL as the two teams make their way to the Eden Gardens.#KKRvDD pic.twitter.com/A702APEwOi

Preview: Delhi Daredevils Gautam Gambhir will be coming back to the city of joy, where he spent his best years as Kolkata Knight Riders skipper. He captained the Kolkata outfit, to two IPL titles during his stay and would be looking to continue his winning run.

This time around he will be wearing the blue and red jersey of Delhi and will face Dinesh Karthik and co, when these two teams collide in the much anticipated clash at Eden Gardens on Monday.

Karthik-led KKR are desperately looking to get their campaign back on track after After back-to-back defeats, while Delhi will hoping to carry their winning momentum from the Mumbai game.

While Kolkata suffered defeats at the hands of Chennai Super Kings and Sunrisers Hyderabad in their last two games, Delhi bounced back with vctory in the last game against Mumbai after tasting defeat against Kings XI Punjab and  Rajasthan Royals in a rain-hit match.

Jason Roy, who was brought into the match against Mumbai in place of Colin Munro, will be looking to carry on the form after playing match winning knock in the last game.

Gambhir too is expected to be among runs at Eden Gardens.

KKR will be mlooking to bring back Sunil Narine at top of the order after the move to bring him down the order in the last game backfired. Karthik would also be hoping that his deputy Robin Uthappa, will be able to get his midas touch with the bat, that has been helping him score heavily .

The home side batting will be tested against quality bowling line up comprising of Trent Boult, Mohammed Shami, Chris Morris and Daniel Christian.

The match will take place at Eden Gardens, Kolkata