Sometimes, it suits teams to think like underdogs as Australia did because the hunger for victory is always more. 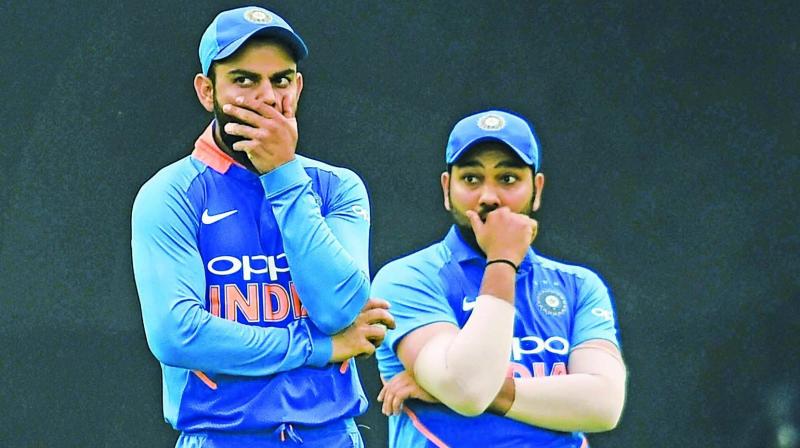 Team India needed this hard knock on the head to get rid of any feelings of invincibility in the 50-overs ODI format. The defeats suffered after leading 2-0 suggests a comprehensive overhaul of the thinking is needed if Team India are to justify the tag of top favourites for the World Cup. Sometimes, it suits teams to think like underdogs as Australia did because the hunger for victory is always more.

The Indians just did not seem to want to win enough even though its angry young captain showed intent in banging that ball into the turf on taking the catch to send back Usman Khawaja. He knew how valuable the breakthrough was. His bowlers let him down after knocking the middle order out in failing to contain the runs the tail notched up in the death overs.

Ironically, the dew could not be an excuse in the decider as India bowled first. The dew factor was certainly observed when Team India failed to stop the record successful chase in Mohali. But then a strategy needs to be worked out to tackle the dew although we know how awkwardly wet and heavy the ball seems to get. Day-night ODIs are such a part of the entertainment package cricket can’t switch to day ODIs just for India’s inability to get over the dew factor.

The biggest failing was that of the bowlers in two successive ODIs at the business end, in Mohali and Kotla, helped along of course by some poor catching in the face of the big chase by Turner & Co. The batsmen couldn’t have done more than put that kind of a total on the board, which became possible as Shikhar Dhawan rediscovered his touch on a flowing track from which the ball came on nicely.

Team India’s woes in the series, despite Virat Kohli’s domineering form with two classy centuries that were nearly flawless, began with misfiring openers, continued with inconsistent middle order batsmen who are immensely promising but seem to be bitten by the T20 bug so much that they wish to hit every ball for four or six and stretched into bowlers, and fielders wilting under pressure.

All the experiments run came to naught. We still don’t know if KL Rahul, Vijay Shankar or Rishabh Pant are mature enough yet to apply themselves into coming up with match winning ODI performances. And with Ambati Rayudu’s form looking rickety, it appears the middle order woes won’t be covered over fully just because a fit Hardik Pandya will slip back into the prime all-rounder’s role soon enough.

At the end of the day it is far from certain who the final 15 will be although the skipper says he knows his starting XI already. You have to give it to Kohli. He has to be confident his team and overall strategy are ready for Cup action. It is just that the bits and pieces have not fallen into place as it seemed when the team was going full steam down under in all ODIs. You can dismiss T20I results as no significant enough to worry about.

If there are creases on the brow now, it is because the Aussies, down and out for a year after losing the services of Steve Smith and David Warner, have managed to get up off the floor and show the cracks in the ‘Invincible Indians’. A whole season of IPL between now and the World Cup is hardly going to present any evidence about who will shine for India at the World Cup. It would be best to disregard the form shown in IPL-12 because we know there is so little correlation between T20s and the 50-overs format even if they are played on very similar skill sets.

Whatever has happened may be a dent to the confidence rather than a strike against the fundamentals on which belief is based that England and India are the teams to beat in the World Cup. It is now a question of how many can put up their hands in support of the Indian captain who is playing a level of cricket that is way above that of his troops. Virat Kohli is also such a super confident person that he may not allow the recent scars to affect his approach. It is the other that fans would have to worry about.

The incidental playing up of the predictive part of the DRS was a big talking point that emerged from one of two events — the one in which the visiting skipper Finch was adjudged leg before. The simulation of the ball’s path seemed totally out of touch with what really happened. We have known this is one of the big faults of the system for which there is no clear-cut remedy. The other event in which a caught behind was not granted against Turner despite a clear spike on Snicko.

Both may have been aberrations. To carry on with what has been set up rather than agonise over it would appear the right course of action.