Ind vs Eng: Chase masters does it again 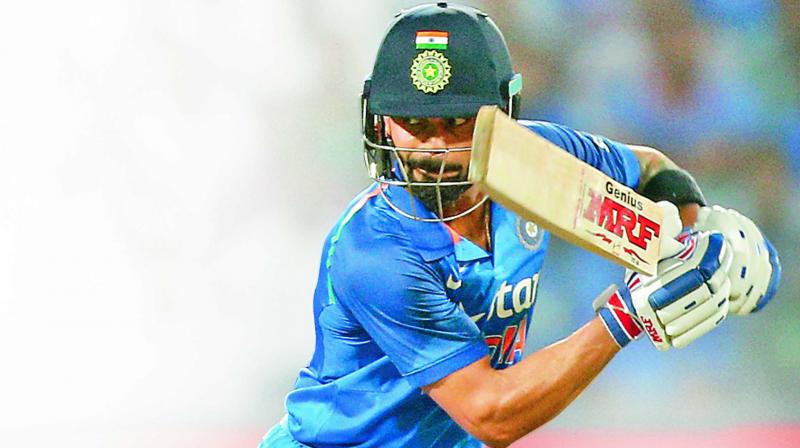 Pune: Virat Kohli has done it. Once again. In his first game as India’s full-time captain in the limited-overs cricket, Kohli led from the front (122 off 105 balls), while the local boy Kedar Jadhav scored a breathtaking hundred (120 off 76 balls), as India pulled off a heist to seal a three-wicket win while chasing 351 against England here on Sunday.

India were 63/4, having lost Shikhar Dhawan (1), K.L. Rahul (8), Yuvraj Singh (15) and M.S. Dhoni (6), when Jadhav joined Kohli in the middle. The duo went on cantering the England bowling attack in their 200-run partnership off 147 balls. Kohli started off on a little out of character note, taking calculated risks. However, he was quick to go back to his tried and tested formula of dealing in singles and doubles and chipping in with a four or a six in between as Jadhav took on the visitors.

While silence enveloped the Maharashtra Cricket Association Stadium after Jake Ball dismissed Dhoni in the 12th over of the Indian chase, the fans at the venue had a gala time soon after as Kohli and Jadhav counter attacked.

Although Kohli, on his way to 27th ODI ton and 17th while chasing, was the centre of attention, Jadhav made sure he would be more than just a side story. The Maharashtra batsman, who has a reputation of tonking bowlers in the domestic cricket, did the same against Ben Stokes and Co.

Although Kohli and Jadhav got out after scoring respective hundreds, India’s lower middle order — Hardik Pandya (40 not out), Ravindra Jadeja (13) and R. Ashwin (15 not out ) — did  not throw in the towel.

Earlier, after putting in to bat, the Eoin Morgan-led side did not let the damp pitch dampen their spirit as they amassed 350. Ben Stokes (62 off 40 balls) and Moeen Ali (28 off 17 balls) gave England a big push in the last 10 overs after Jason Roy (73 off 61 balls) and Joe Root (78 off 95 balls) laid a perfect platform for lower order to hammer India’s bowling.

While Jasprit Bumrah’s direct hit caught Alex Hales unawares, Roy’s breezy innings kept England’s scoreboard ticking. The Roy-Root combo put up a 69-run partnership before the England opener was stumped off Jadeja’s bowling. Skipper Eoin Morgan was next to get out (28 off 26 balls) as the Decision Review System helped Pandya get his first wicket in the match.

Pandya added one more wicket to his account after Jos Buttler (31 off 36 balls) was holed out in the deep. Root, who looked all set for a long haul, followed Buttler soon after Pandya, manning the long-on, kept his balance to take a neat catch off Bumrah’s bowling.

England were 244/5 from 41.4 overs when Root was out. India, though, failed to cash in on a chance to run through England’s lower middle order following a spate of no-balls and counterattacking batsmanship from Stokes and Ali.