David Warner had played an unbeaten knock of 335 runs vs Pakistan in November and was on course to break Lara's individual score of 400. 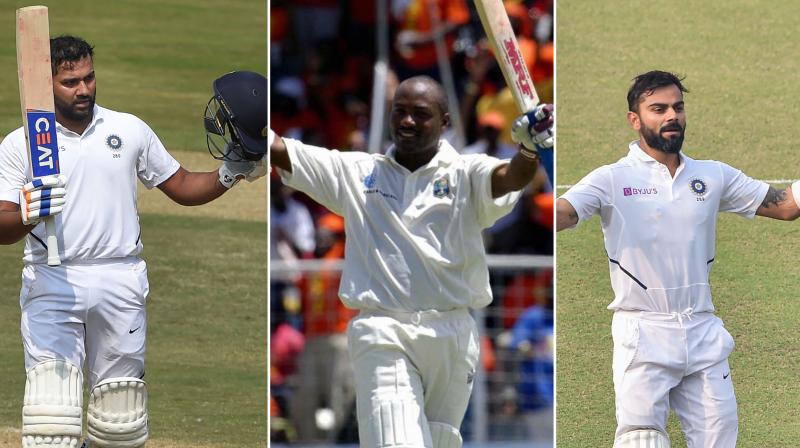 Former West Indies skipper Brian Lara has named Virat Kohli and Rohit SHarma as the two Indian top guns who can break his record of 400 runs in the single innings of a Test match. (Photo:AFP/PTI)

New Delhi: Former West Indies skipper Brian Lara has named two Indian top guns who can break his record of 400 runs in the single innings of a Test match.

"Attacking players are the ones who are best suited to break a record. Players like Virat Kohli with the way he scores, Rohit Sharma on his day or day an a half could definitely break the record," he added.

Australian cricketer David Warner had played an unbeaten knock of 335 runs against Pakistan in November and was on course to break Lara's individual score of 400. It was then that Australia's skipper Tim Paine decided to declare the innings.

"I had a chat with him, he said it was not up to him. It was the team's decision. He looked destined to do it but there was a possibility of rain too," said Lara.

He made these statements on the sidelines of the announcement of first-ever Samarthanam Women's National cricket tournament for Blind.

Cricket Association for Blind in India (CABI) has taken the initiative to organise Blind Cricket Nationals for Women in association with Samarthanam Trust for the Disabled.

The tournament, which will be held in T20 format from December 16 to December 19 in New Delhi, has the full support of Brian Lara.

"Disability should not be considered a hindrance to achieving one's goals. I thoroughly appreciate this fantastic initiative taken by CABI and Samarthanam Trust in India and I am convinced that if such strong stakeholders come together around the world, then there is no reason why blind cricket will not see a growth world over," said Lara.

"Such competitions will also provide a platform to such talented women and empower them," he added.