India have been reaching semi-finals and finals of the ICC tournaments consistently but have fizzled out on the big days. 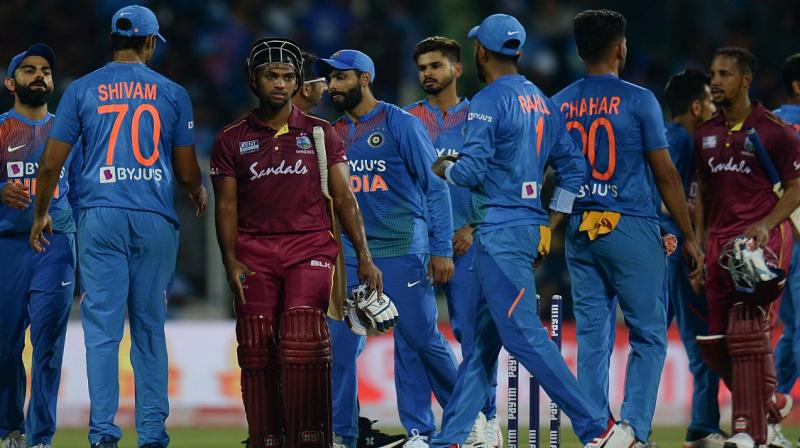 The Virat Kohli-led Indian team needs to figure a way out to 'turn it on the big day' to break its knock-out jinx at the global white ball tournaments, feels the legendary Brian Lara. (Photo:AFP)

New Delhi: The Virat Kohli-led Indian team needs to figure a way out to "turn it on the big day" to break its knock-out jinx at the global white ball tournaments, feels the legendary Brian Lara.

India have been reaching semi-finals and finals of the ICC tournaments consistently but have fizzled out on the big days and it hasn't gone unnoticed with Lara.

"That's one of the things that you have to understand. Everybody is lining India up. It's like fait accompli that India is going to make the semi-finals or definitely going to make the knock-out stages," Lara said on the sidelines of the announcement first ever Samarthanam Women's National Cricket Tournament for the Blind.

The world record holder of highest individual score in Test cricket feels that India need to grow that aura of invincibility on big days like West Indies of 70's or Australian team of the last decade that won hat-trick of 50-over World Cups.

"Everybody is gearing up for that match, whether its a quarter-final or semi-final match. Look at how New Zealand played against India. They knew whom to target and what to do. So India will have to appreciate that.

"The invincibility of the West Indies in 75 and 79, Australia about three or four World Cups, they would tick all the boxes. They were so dominant. They knew in 1999, 2003 and 2007, they were the strongest teams. But they made sure that they tick all the boxes and stay that step ahead. Everybody knew that they had to beat Australia to win the World Cup. India need to appreciate that and turn it on at the right time," said the 50-year-old from Trinidad and Tobago.

Skipper Kohli and his deputy Rohit Sharma are two of the best players in white ball format but teams have somehow figured out that getting them would do the job.

"You always feel that there is an opportunity to beat India if a Kohli or a Rohit doesn't score. That always is a weak-link. If you can get these two guys, we are into them. If they can defy that and have all 11 players walk in same direction, understand their roles, I think India can win many many World Cups in future.

"It's just a one-match disappointment for India. It happened in England, it happened before and it might happen again where you don't play at your best on one such day."

Lara is hopeful that West Indies with some good talent can do justice in the upcoming T20 World Cup after a good show in their 1-2 defeat against India in the recently concluded series.

"West Indies team performed creditably in the three-match series. India stamped their authority winning the last game. But there are a lot of bright young stars in the West Indies team, and in 10 months they will be a force to reckon with. We are double World T20 champions so don't take us easy."

It was destiny that David Warner stopped at 335 not out and didn't go on to break his individual world record of 400 but someone like Rohit Sharma can break Lara's record.

"He did look destined to do it. But the decision to declare was vindicated as Australia got six Pakistan wickets by the evening. It's all destiny and it's not something that you could plan," Lara said.

"Players like David Warner, in past Gayle, Inzamam, Jayasuriya, Hayden, attacking players are the once who are best suited to break record.

"Virat Kohli, Rohit Sharma if he bats day or day and half, can definitely break the record. Hopefully, I am around to see that. I don't think records are meant to be kept. Sitting down as 50-year-old with two World records is not that exciting."