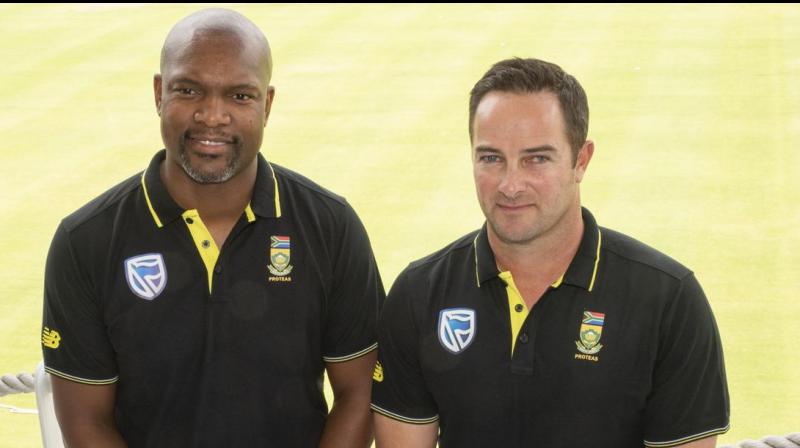 Former Test wicketkeeper Mark Boucher was on Saturday named as South African team head coach until 2023. An upbeat Boucher said South African cricket had been through 'trying times' but added that he was confident that the national team could be successful against England. (Photo:AFP)

An upbeat Boucher said South African cricket had been through "trying times" but added that he was confident that the national team could be successful against England.

"Beware of a wounded buffalo, especially in Africa," he said.

The announcement was made by Cricket South Africa interim director of cricket, former Test captain Graeme Smith, who only took up his post on Wednesday.

Boucher, 43, played in 147 Tests, 290 one-day internationals and 25 Twenty20 internationals for South Africa before a serious eye injury ended his career in 2012.

He has coached the Titans franchise for the past three seasons, winning five of a possible nine trophies.

"I felt that at this stage the Proteas (national team) needed a really hardened, internationally experienced guy," said Smith.

Enoch Nkwe, who was previously interim team director and in charge of the team on a recent tour of India, was named assistant coach, also with a contract until the end of the next Cricket World Cup in 2023.

Faf du Plessis was confirmed as captain for the Test series against England which starts at Centurion on December 26, while former Test batsman Ashwell Prince was named coach of South Africa A.

Smith said he expected to appoint batting and bowling consultants within the next week.

Boucher said South Africa had rebounded in the past.

"I have been involved in sides where we've had some very tough times," said Boucher.

"One of the toughest was the Hansie Cronje (corruption) saga but straight away after that we beat Australia.

"I think we've got a very good chance of turning it around. I've been in set-ups where we have turned around in a couple of days."

Smith said an emergency selection committee consisting of Boucher, Nkwe, Du Plessis and Linda Zondi, who was sacked as convener after South Africa's poor World Cup campaign, would announce a squad on Monday for the first Test as well as a South Africa A team to play against England.

The Test squad will assemble on December 18.

Against the background of controversy about the administration of South African cricket, with calls for the board of CSA to resign, Smith said he personally had no contact with the board about making what amount to long-term decisions.

He said he had dealt only with CSA interim chief executive Jacques Faul.

"There's no relationship (with the board) at this stage," he said.

"My point of call is Jacques." He said recent developments had been disappointing.

"We need to turn around the image. A lot of things still need to shift. My goal is focused on getting the Proteas and the structures performing well.

"We know that cricket is a big part of bringing in budgets and a high-performing Proteas team will go a long way towards providing some confidence."

Although Smith's interim role is only for three months, Faul later told AFP that he hoped the former captain would commit to a long-term position.