The cyclonic storm caused substantial damage to the MA Chidambaram stadium but the square and the outfield have remained unaffected. 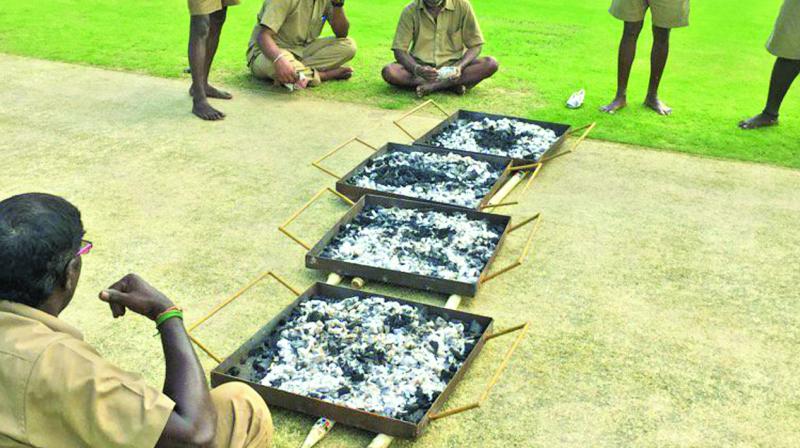 TNCA groundstaff use coal trays to dry the strip for the fifth and final Test against England starting here on Friday. (Photo: Twitter)

Chennai: Putting all concerns about the state of preparedness of the Chepauk pitch to rest in the aftermath of Cyclone ‘Vardah’, the TNCA groundstaff were seen using novel methods to get the 22-yard strip into shape for the fifth and final Test against England starting here on Friday.

With little time available, the groundstaff had to resort to relying on the age-old method of using burning coal trays to dry the pitch. The cyclonic storm caused substantial damage to the stadium but, significantly, the square and the outfield have remained unaffected.

The BCCI’s south zone curator PR Viswanathan is satisfied with the current status of the pitch. “The wicket prepared for the match and the outfield are in excellent condition. It should play true but I cannot say as to how the wicket would behave,” Viswanathan said.

Meanwhile, K.S. Viswanathan, TNCA secretary, expressed his satisfaction on the work going on in the periphery of the stadium, especially with hundred per cent perfect conditions of the wickets and the outfield and was optimistic about scheduled start of the match, weather permitting.

The TNCA secretary said that due to a better drainage system, the outfield will not remain soggy. “One good thing is the drainage system at the stadium is very good. It is unfortunate that the practice pitches on the other side of the pavilion could not be readied as they were totally wet.”

He also informed that the damaged air conditioners and one of the stadium gates are being repaired.