We know teams are going to put us under pressure and we appreciated that, said the Indian Test skipper. 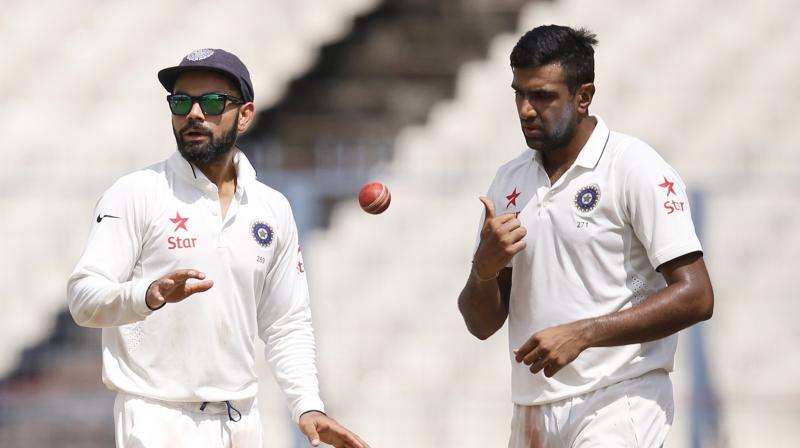 Although India have not last five of their Test series, skipper Virat Kohli admitted that his team is not invincible. (Photo: AP)

Chennai: India has been on a roll as they have been undefeated in the last 17 Test matches, but skipper Virat Kohli feels the team has lot more to achieve before admitting that don't feel "invincible".

India, which has taken an unassailable 3-0 lead in the ongoing five-match series against England, will aim to become the first Indian team to go unbeaten in 18 matches by avoiding defeat in the series finale in the dead rubber at the MA Chidambaram Stadium in Chennai starting on Friday.

Addressing a presser on the eve of the Chennai Test, Kohli said, "We don't feel invincible to be honest. We respect every opposition. We admit every time we are put under pressure. We know teams are going to put us under pressure and we appreciated that, we accept that and we try to find a way out of it and that's been the key for us."

"We still understand we have a lot of cricket to play everywhere in the world. It's not only about one period that we are going through. It looks really good because we have come out of transition and immediately we started winning games but I wouldn't take this for overconfidence."

"It's an ongoing process which needs to be sustained for the next five-six-seven-eight years for us to become top quality side and leave a mark on world cricket, may be known as the one of best teams to have assembled on the field and we want to do it across all formats and make that mark for Indian cricket on the world stage," he added.

The Indian batting mainstay also insisted that the team was not looking for a 4-0 scoreline but to perform well and emerge as victorious in the last Test against the Alastair Cook-led side.

"Well, we just take one game at a time. I don't think we are looking at the collective series win as 4-0. Every game for us is separate from the other one. The intensity and the motivation to win the Test match remains the same whether we have won the series, haven't won the series or it's drawn or whatever the case might be. So, we are not looking at the score-line as such," he said.

"We just want to continue what we have been doing. A lot of hard work goes in to win a Test match and to put a number before it would be unfair to the players and the series as well," he added.

The 28-year-old also reiterated his praise for the lower order batting contribution and credit Ravichandran Ashwin, the current world No. 1 Test all-rounder for the same.

"Ashwin has set a benchmark for all other spinners to contribute with the bat. Jadeja has come of age with the bat in the series. We saw his crucial knock in Mohali. Then Jayant gets inspired seeing Ashwin the way he improves his cricket every time. So, Jayant always has been a keen learner and he works a lot on his batting as well," he said.

"So are the fast bowlers. Mohammed Shami, Bhubneshwar Kumar and Umesh have become so much better with the bat and they understand the importance of those runs. Amit Mishra, whenever he has played, has done very well with the bat. So, as a captain it always gives you more freedom to play five batsmen rather than thinking of another batsman. I give them the credit for working hard and giving the team the option."

The Test skipper also praised spinner Jayant Yadav, who scored a hundred in the Mumbai Test, saying that he has all it takes to become a successful cricket.

"Jayant has come in and he has his plans. He knows his game very well. He knows his bowling very well, has a lot of control. And he rushes the batsman. He doesn't give batsman much time to react after the ball has pitched. And he has those revs (revolutions) on the ball and strength in his shoulder to keep pitching the ball in the right areas," he said.

"I think Graeme Swann was very similar the way he bowled, the pace control was magnificent without giving the ball too much air and that's why he was so successful. That's what I see with Jayant as well. Jayant has been a great addition to Team India."

Kohli, who scored 235 in the last Test without a six, said it was his conscious effort to not play aggressively and help his team.

"It's a conscious effort to curb my aggression. I feel the urge to go after the spinners but I also understand that I have to be there for an hour or two more. I also think there is no need to hit sixes. It is just the excitement of the player reach a 150 or 160 to express himself."

"I can rotate strike and not big risk and cost the team some momentum because we have decided to play five batsmen then it is my responsibility to play according to plan and not according to what I want. It's about understanding what the team needs and you need to adjust according to that," he explained.

Kohli, before the Chennai Test, said that he trying to plan out and play county cricket before India travel to England for a series in 2018 to understand the conditions there.

"If I have chance, I would love to be there. Say a month or a month-and-a-half before the tour. Get used to playing conditions and understand how the wickets behave in that phase of the year. I think these things matter a lot."

"I have been thinking about and take time out to play there," he added.