Chief Justice TS Thakur, during the proceedings, asked the Amicus Curiae whether the BCCI president had lied in his affidavit. 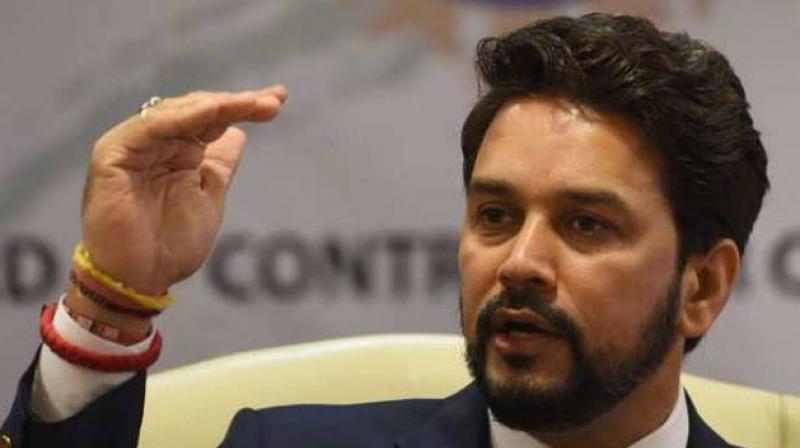 According to the Amicus Curiae, Anurag Thakur had sought to obstruct the Lodha recommendations in a letter to ICC. (Photo: AFP)

New Delhi: Anurag Thakur is under fire from the Supreme Court, which has said that the Board of Control for Cricket in India (BCCI) chief has committed perjury.

Chief Justice TS Thakur, during the proceedings, asked the Amicus Curiae whether the BCCI president had lied in his affidafit.

The advisory bench replied on the affirmative, saying that Thakur had claimed to have sought the help of former BCCI and current International Cricket Council (ICC) chairman Shashank Manohar. However, this claim was denied by the latter. The Amicus Curiae said that Thakur had tried to obstruct the Lodha Reforms, in his letter to ICC.

The SC has also given BCCI one week to suggest a name, to take over as the administrator of the board.

In the status report submitted on November 14, the Lodha panel has sought a direction to appoint GK Pillai as an observer to “guide” BCCI in administrative works including award of contracts, transparency norms and holding of future domestic, international and IPL matches.

The committee has also sought a declaration from the court that all office bearers of cash-rich BCCI and state cricket bodies, who are in violation of laid down norms with regard to 70 year age cap, citizenship and tenures, “cease to hold office forthwith”.

On July 18, SC accepted almost all major recommendations of the Lodha committee on reforms in BCCI including a bar on ministers and civil servants and those above 70 from becoming its members, but left it to Parliament to decide whether it should come under RTI and betting on the game should be legalised.

The court had also accepted the recommendation that one person should hold one post in cricket administration to avoid any conflict of interest and scrapping of all other administrative committees in BCCI after the CAG nominee comes in.