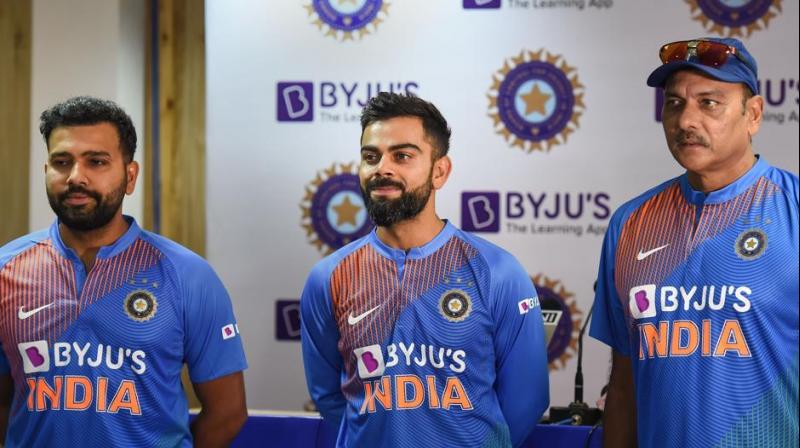 Mumbai: India is all set to take on South Africa in a T20 match in Dharamsala on Sunday. Making their debut this match is BYJU’s, as India’s new sponsor, replacing OPPO. The new jersey was unveiled in a press conference on Saturday. Team India coach Ravi Shastri, captain Virat Kohli and vice-captain Rohit Sharma clicked photos sporting the jersey.

In a statement in July, BCCI has said, “BYJU’S will be taking over all obligations of the current team sponsor OPPO mobiles India private limited. The BCCI is pleased to welcome India’s leading education and learning app BYJU’S as the official Team India sponsor from 5th September 2019 until 31st March 2022.”

BCCI also had tweeted photos of the training sessions, in which, the Indian players were seen sporting the new jersey. The post read, “Snapshots from #TeamIndia’s indoor net session in Dharamsala ahead of the 1st T20I against South Africa.”

Snapshots from #TeamIndia's indoor net session in Dharamsala ahead of the 1st T20I against South Africa.#INDvSA pic.twitter.com/9SxAi9ocOl

The Indian players were forced to train indoors due to bad weather conditions in Dharamsala. India are scheduled to play three T20Is and as many Tests against South Africa in their tour of India.