Kohli and Iyer had partnerships of 125 and 120 in the second and third ODIs respectively, overcoming tricky situations. 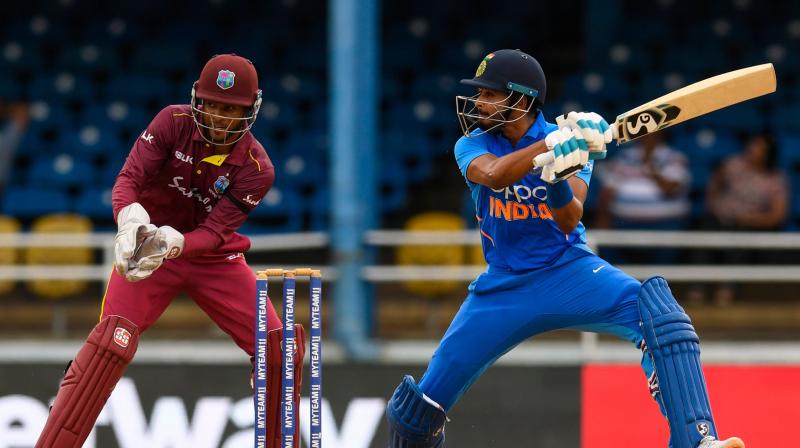 Port-of-Spain: Indian captain Virat Kohli praised him for coming good under pressure in the ODI series against West Indies and Shreyas Iyer said he loved batting in tough situations when the dressing room is "nervous".

The 24-year-old Iyer played a big role in India's 2-0 series win against the West Indies, ably supporting captain Virat Kohli, who excelled with back- to-back centuries.

Kohli and Iyer had partnerships of 125 and 120 in the second and third ODIs respectively, overcoming tricky situations.

In the third game, Iyer came out when India were in a spot of bother at 91 for three in the 13th over while chasing a revised target of 255 from 35 overs. His counter-attacking 65 from 41 balls took the pressure off Kohli, who remained not out on 114, and changed the complexion of the match.

"I am very happy. I want to come out to bat in this kind of tough situation when everybody in the dressing room is nervous. I love it because the (complexion of the) match can change and anything can happen in the team position," Iyer told Chahal in an interview after the third ODI on Wednesday.

At the post-match press-conference, an impressed Kohli said Iyer could be a "regular feature in middle order" if he continues taking responsibility like he did during this three-match series, which India won 2-0.

"He (Iyer) was not intimidated at all, he was very confident, very sure of his game. At no stage he looked like getting out. He has suddenly presented a role for himself, playing according to the situation. Hopefully he keeps performing like this for the team ... he can be a strong contender and a regular feature in the middle order," Kohli said.

Iyer hit five sixes during his 41-ball knock -- two each off the bowling of Roston Chase and Fabian Allen and one off Carlos Brathwaite -- and he joked he was taking "revenge" for Chahal being hit for maximum runs by Nicholas Pooran during the West Indies innings.

"I have to take revenge of our bowler being hit. He (Pooran) is a fine batsman but since Chahal has been hit I am angry and so will have to take the revenge," Iyer joked.

Asked by Chahal what he had during the breakfast before the match, Iyer said, "I did routine and had my breakfast. I ate three eggs."