After the Super Over ended in a tie, England was declared as the winner of the World Cup on the basis of them having scored more boundaries. 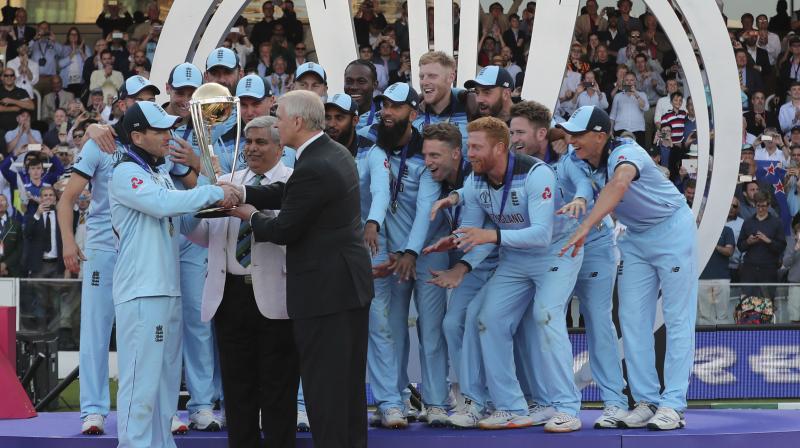 In the 50-over spell, both England and New Zealand registered scores of 241. Similarly, in the super over, both managed to score 15 runs. (Photo:AP)

New Delhi: As the ICC Men's Cricket World Cup final witnessed a first-ever super-over in which England came out triumphant despite a tie in the Super Over as well, fans felt it was unfair for New Zealand and insisted that the trophy should be shared by both the finalists.

After the Super Over ended in a tie, England was announced as the winner of the World Cup on the basis of them having hammered more boundaries than the visitors on Sunday at Lord's.

In the 50-over spell, both England and New Zealand registered scores of 241. Similarly, in the super over, both managed to score 15 runs. However, the rule based on which England were declared the winner, did not go well with the fans, who urged the International Cricket Council (ICC) that the trophy be shared between both teams.

Another user wrote: "WTH SO UNFAIR. THIS BOUNDARIES RULE IS STUPID. #ShareTheTrophy #ENGvsNZ."

"ICC please let then share the trophy after this kind of finals !! #ICC #NZvsENG #WC2019 #sharethetrophy," another user requested the cricket governing body.

A cricket-fanatic wrote on the micro-blogging site, "Well maybe England deserve to win the World Cup before the start but how can one say New Zealand lost today... #sharethetrophy #cwc2019final."

Another fan opined that boundary-count should not be the basis of deciding the winner.

"#ShareTheTrophy #Cricket #CWC19Final #CWC2019 #ENGvsNZ .. I think after super over tie..sharing could b d good option..both team applies superb efforts to clear d two stage of this Game...boundary can't b/shudnt b d the option to decide," the tweet read.

A fan asked ICC to change the rule as he tweeted: "Dear #ICC please change the rule to declare the champion based on boundaries. If any team making 4 runs in single ball with direct boundary or by running singles that's their strength... so please share the trophy if match is still tie in super over.... #TrueWinnerNZ."

"You can't decide World Cup final on no of boundaries scored.. @icc why is it so batsmen friendly. The no of wickets lost by Nz wer fewer. Just share the trophy if you can't get the result in the super over. Just rewrite rules #EngvNZL #ICCWC2019 #icccwcfinal" another tweeted.