The finals between England and New Zealand was one for the ages as the match between both these sides did not have a winner after 50-overs. 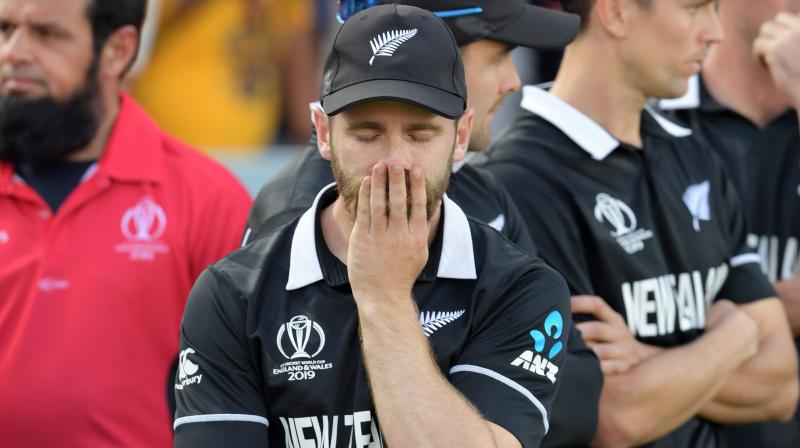 After missing out on the ICC Men's World Cup trophy, skipper Kane Williamson said the loss against England in the finals based on boundary count was "pretty hard to swallow".

The finals between England and New Zealand was one for the ages as the match between both these sides did not have a winner after 50-over and super over action. In the end, England was announced as the winner as they had hit more boundaries in the match.

"I suppose you never thought of asking this question and I never thought I would have to answer this. It's pretty hard to swallow when two teams have worked really hard to reach this point. It's what it is, the rules were there at the start, no one thought it would come down to this. It's a pretty hard loss to swallow. The rules are there. It is something you don't consider when you go out to play. I didn't even know what the boundary count was, but we were behind," Williamson said at the post-match conference.

"Just gutted. The guys put a huge amount of work to play the World Cup final. There were a couple of uncontrollable situations in the match, but I can't take away anything from England's campaign. Either side walking with the title today probably feels fortunate," he added.

In the finals, New Zealand had won the toss and opted to bat first. The Kiwis posted a score of 241/8 in the allotted fifty overs. Henry Nicholls top-scored for the Black Caps as he played a knock of 55 runs whereas Chris Woakes and Liam Plunkett scalped three wickets each for England.

Williamson said that the wicket was probably a 250-run wicket and the pitch wasn't that easy to bat upon.

"It was a 250-260 wicket. We knew that it wasn't easy and we expecting the pitch to dry a little more. We were able to pick up early wickets, it's very difficult to look at one or two areas. The amount of heart guys showed today is truly commendable. Someone had to walk away with the title, and we are gutted we are not the one," Williamson said.

"The match ebbed and flowed, but the guys showed amazing spirit to stay in the game, it is what it is," he added.

Williamson said that the final against England was a fantastic game to be part of and he hoped the match will help in attaining more viewers for the sport.

"It was a fantastic game to be part of. Everybody loved it, English probably loved it more than we did. The game always feels better when you are on the right side of the outcome. I hope this World Cup will help in achieving more viewers. But it's hard to understand these situations when you are thinking about the World Cup final," Williamson said.

"I have heard that a lot of people enjoyed our cricket back home. I suppose being in another country, every match feels like an away match. It's great when sport can have an impact on a country. We can only hope the people back home were able to enjoy what we achieved in this World Cup," he added.

The Kiwi skipper was announced as the player of the tournament for scoring 578 runs in the tournament from 10 innings. The right-handed batsman registered centuries against South Africa and West Indies in the group stage.

"Individual performance is ideal when it helps the team. I think all the guys in our side should feel a lot of pride for whatever we achieved in the tournament. Individual accolades are secondary things, being in a World Cup was huge. Playing in the final was always the focus," Williamson said.

Chasing a moderate target, England kept on losing wickets at regular intervals and in the final over they needed 15 runs for the win. England had the rub of the green going their way as Martin Guptill's throw went to the boundary, giving England four runs due to an over-throw. But New Zealand managed to keep their nerve to take the match into the super over.

In the super over, both teams managed to score 15 runs each but England was announced as the winner as they had hit more boundaries in the final.