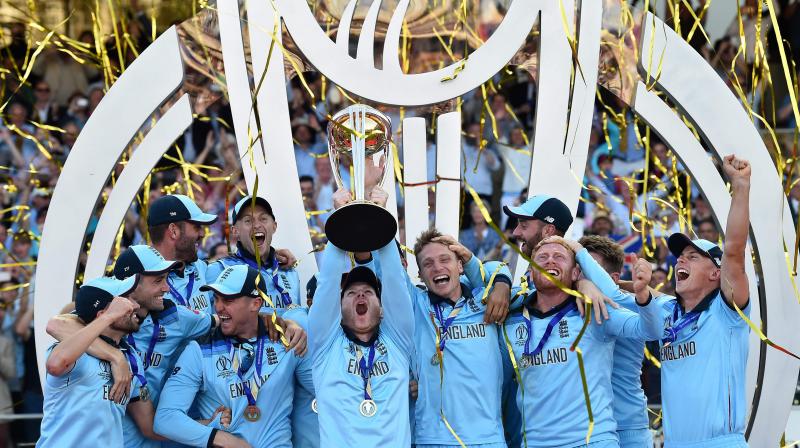 In a dramatic encounter on Sunday night, the pendulum swung viciously in the final over with England needing nine from three balls when Ben Stokes hit Trent Boult to the deep. The return throw from Martin Guptill hit Stokes' bat as he dived to make his ground for the second run. The ball rebounded to the rope for additional four runs. (Photo: AFP)

Wellington: "The Cricket World Cup final with 22 heroes and no winner", read a headline as media in New Zealand commended the team and condemned the rules that "robbed" the Black Caps of a maiden title triumph.

In a dramatic encounter on Sunday night, the pendulum swung viciously in the final over with England needing nine from three balls when Ben Stokes hit Trent Boult to the deep. The return throw from Martin Guptill hit Stokes' bat as he dived to make his ground for the second run. The ball rebounded to the rope for additional four runs.

It impacted the equation to such an extent that the heart-stopping contest stretched to the Super Over and eventually the hosts lifted their maiden World Cup trophy on boundary counts after the scores were tied at 15.

England had hit 26 boundaries to the Black Caps' 17, the hosts were declared the champions.

"Cricket World Cup final: Boundary countback robs Black Caps of victory", read the headline of an article in the stuff.co.nz.

The headline of the top sports story of 'New Zealand Herald' read: "Any Given Monday: The Cricket World Cup final with 22 heroes and no winner."

"Should England have got five, not six runs for overthrows?," questioned another piece in the newspaper.

Former New Zealand coach Mike Hesson said Super Over was a terrible way of deciding a big event like the World Cup.

Hesson believes England skipper Eoin Morgan and his Kiwi counterpart Kane Williamson both deserved to lay their hands on the trophy.

"Kane Williamson and Eoin Morgan should have jointly lifted the Cricket World Cup after a drama-packed Sunday evening at Lord's," Hesson wrote in his column for stuff.co.nz.

"Certainly neither England nor New Zealand deserved to lose such an incredible, seesawing final when they couldn't be split after 50 overs each. England's captain Eoin Morgan has the trophy but whether the Super Over was a fair way to decide it is another story.

"Using a Super Over to decide it was farcical and the International Cricket Council needs to give itself an uppercut for even entertaining it as a tiebreaker. New Zealand captain Kane Williamson should have got his hands on the trophy, somehow, after that cruel ending," he added.

Hesson said a Super Over is best suited to decide a winner in the knock-out stages of a tournament but not for the title clash.

"The whole idea of a Super Over is in a situation when you need a side to progress, like in a semifinal. That's when the necessity of finding a winner makes sense," he wrote.

"When you're playing a final of a World Cup after seven weeks' hard toil, to decide it by some obscure means that is made for T20 cricket is ridiculous."

A "traumatised" New Zealand Prime Minister Jacinda Ardern plans to give a heroes' welcome to the Black Caps on their return, saying she was extremely proud of what the team has achieved in the World Cup regardless of the final outcome.

"I think probably like a lot of New Zealanders I'm still feeling quite traumatised by that match. It was an incredible game, I can't recall seeing a game like it and I think it will just go down in history for just being a remarkable game of cricket," Ardern was quoted as saying in 'Radio New Zealand'.

"But regardless of that final outcome I just feel incredibly proud of the Black Caps and I hope every New Zealander does because they played remarkable cricket across the course of that tournament, and they certainly did in that last match."