New Zealand lost to England in perhaps the greatest World Cup final at the Lord's on Sunday due to inferior boundary count. 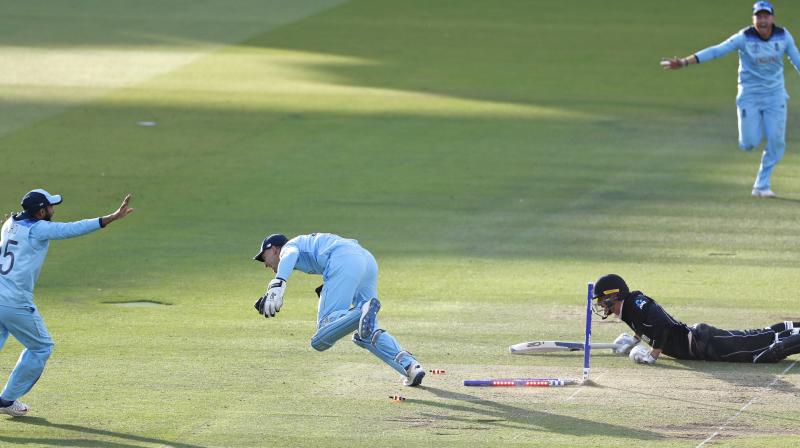 There were the 'uncontrollables' like the Martin Guptill overthrow which hit a lunging Ben Stokes' bat and went for six overthrows in the 50th over of the England innings. (Photo: AP/PTI)

London: A "gutted" New Zealand captain Kane Williamson finds it difficult to accept that his team lost the World Cup final to England on a "boundary countback" rule but the revered "gentleman" of the 'Gentlemen's game' isn't angry about it.

New Zealand lost to England in perhaps the greatest World Cup final at the Lord's on Sunday due to inferior boundary count (16 in 50 overs to hosts' 24) after both the regulation 50 overs and the Super Over ended in ties.

"While the emotions are raw, it is pretty hard to swallow when two teams have worked really, really hard to get to this moment in time.

"When sort of two attempts to separate them with a winner and a loser it still doesn't perhaps sort of shine with one side coming through, you know," Williamson summed it up nicely.

However, like a true sportsman, he had no intention of questioning the questionable rules set by governing body, slammed as "ridiculous" by former cricketers.

"It is what it is, really. The rules are there at the start. No-one probably thought they would have to sort of result to some of that stuff. A great game of cricket and all you guys probably enjoyed it," he said.

There were the "uncontrollables" like the Martin Guptill overthrow which hit a lunging Ben Stokes' bat and went for six overthrows in the 50th over of the England innings.

Williamson, after a break, he would like to have a chat and reflect on the tough evening.

"As to everyone else, I think they are still here, they want more. But we are looking forward to putting our feet up now and having a bit of a chat and reflection about our campaign," he said.

Whether it's the overthrows off a rebound or boundary count-back, Williamson says that he can't blame the rules which have been in place for some time now.

"The rules are there I guess, aren't they. And certainly something you don't consider going into the match that maybe if we could have an extra boundary and then tied two attempts at winning, it we will get across the line and they didn't think that either," he said.

There was a lot of pain in his smile. The eyes were a giveaway. What could he have done, laugh, cry or be angry at what happened an hour back?

"Laugh or cry, it's your choice, isn't it? It's not anger. There's a lot of disappointment, I suppose. Yeah, the guys are really feeling it and I think it's probably more down to some of the uncontrollables that go on when they have put in such a huge amount of effort," he said.

A journalist wanted to remind Williamson that he has used a lot of smart phrases like "uncontrollable" and "thin margins" and the skipper stopped him in his tracks.

"Dogs as well, I have used dogs," he laughed referring to terms like "underdogs" and "party-poopers" used by the British media before the start of the finals.

There couldn't have been a better final.

"Yeah, everybody loved it? The English loved it more than we did, I think," he quipped.

Trent Boult touched the boundary ropes during the dying moments trying to latch onto a catch and Williamson very sportingly told umpire Marais Erasmus to signal a six.

A TV replay could have been demanded but he knew that his fielder had touched the ropes.

So doesn't he expect all players to be gentleman like him? No, he doesn't, Williamson made it clear that it is to each his own.

"Everybody is allowed to be themselves. That is a good thing about the world. And everybody should be a little bit different as well. Really difficult question to answer he said.

"That is probably my best answer, just be yourself and try and enjoy what you do," he left the room amid a standing ovation.