The chase had an exhilarating start. England’s talismanic opener Jason Roy should have been out for a golden duck. 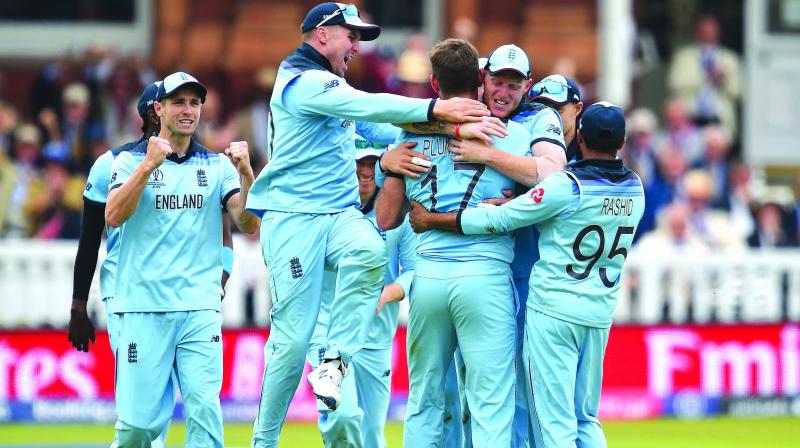 LONDON: It has come home, finally! And, England couldn’t have chosen a better venue than the storied Lord’s — the home of cricket — to end their long and agonising wait. And what a way to win their maiden crown! It was an absolute thriller as England edged New Zealand by a count of boundaries — following a tie after a tie — to emerge the new world champion.

By lifting the trophy at the famous Lord’s balcony, Morgan joined the likes of Bobby Moore (football, 1966), Martin Johnson (rugby, 2003) and Heather Knight (women’s World Cup in 2017) to have brought the World Cup home.

What started as dull proceedings under the cloudy skies sprung to life with England left to chase a moderate target of 242. And who would have thought it could develop into arguably the best finish in the ODI history. Even the Super Over that ensued the tie couldn’t separate the teams. England won on the account of scoring more boundaries  (26, including that of Super Over) than New Zealand’s tally of 17.

England made 15 runs in the Super Over after the match tied at 241. New Zealand needed two off the last ball, but Martin Guptill fell short as England players celebrated by throwing themselves on the field. Jofra Archer who bowled the final over was reduced to tears as he kneeled on the hallowed turf. 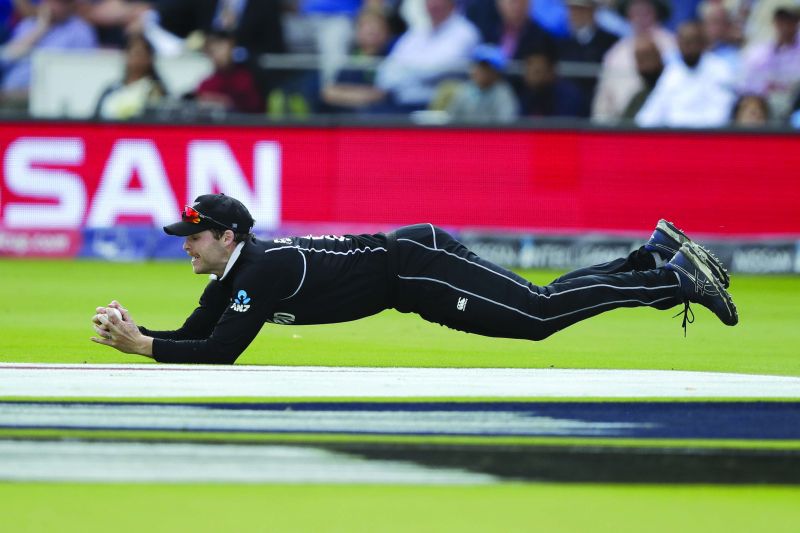 Lockie Ferguson of New Zealand dives to catch England captain Eoin Morgan off the bowling of Jimmy Neesham during the World Cup final at Lord’s Cricket Ground in London on Sunday. (Photo: AP)

England needed 15 runs in the last over. After two consecutive dot balls, Ben Stokes whacked Trent Boult over the midwicket boundary and inadvertently deflected a throw from the outfield into an overthrow boundary. The element of luck reduced the equation to three runs off two balls, but the drama was far from over. Adil Rashid and Mark Wood were run out in consecutive deliveries to force the Super Over.

Earlier, a brilliant fifth-wicket stand — 110 off 123 — between Ben Stokes (84 not out) and Jos Buttler (59) reinvigorated England’s chase after Morgan’s dismissal left them in trouble at 86 for 4. The match was evenly poised when England needed 127 runs in 20 overs.

The chase had an exhilarating start. England’s talismanic opener Jason Roy should have been out for a golden duck. Left-arm pacer Trent Boult pinned Roy down, but umpire Marias Erasmus turned down the LBW appeal. The Kiwis promptly reviewed it, but to everyone’s surprise, it was declared as umpire’s call even though the major part of the ball was hitting the leg-stump. Boult and Matt Henry bowled their hearts out with the new ball and Colin de Grandhomme built more pressure by bowling two consecutive maidens. Jonny Bairstow (36) showed a lot of patience against the moving ball, but eventually dragged one onto his stumps.

Earlier, Liam Plunkett’s middle over mayhem restricted New Zealand to 241 for 8. The tall pacer ended with figures of 3 for 40, claiming the important wickets of Williamson (30) and Henry Nicholls (55) in the space of 14 balls. Plunkett, the oldest member of the England squad at 34, also removed the dangerous Jimmy Neesham for 19.

It was a bold decision to bat first in overcast conditions, but Williamson knew even a moderate total would be hard to chase given the magnitude of the occasion.

After a 15-minute delay owing to early morning showers, the early exchanges played into the hands of England. Two close decisions brought umpires into the spotlight. Kumar Dharmasena raised his finger after Chris Woakes appealed for LBW against Henry Nicholls. However, he had to change the decision following a review. Martin Guptill then decided to break free. The opener who struggled with the bat since scoring a fifty in the opening match announced his resurgence with an eye-catching uppercut that sailed over the point boundary. Guptil, however, fell in Woakes’ trap soon. He also blew a DRS call before walking back to the Long room. Captain Williamson steadied the ship for a while before Plunkett delivered a double blow. Umpiring error ended Ross Taylor’s stay. The Kiwis didn’t have a review left and much to their disappointment the replays suggested that the ball was missing the stumps. The Kiwis collected 62 runs off the final 10 overs with Tom Latham making a 57-ball 46.

For the first time, the team who occupied the home dressing at Lord’s have won the World Cup final, ending a 45-year jinx. Before Sunday’s title clash, Lord’s had hosted four finals with the champions emerging from the ‘away’ dressing room on the right side of the historic Marylebone Cricket Club pavilion.