The left-handed batsman met Plaha ahead of Australia's game against Sri Lanka and presented him with an autographed team shirt. 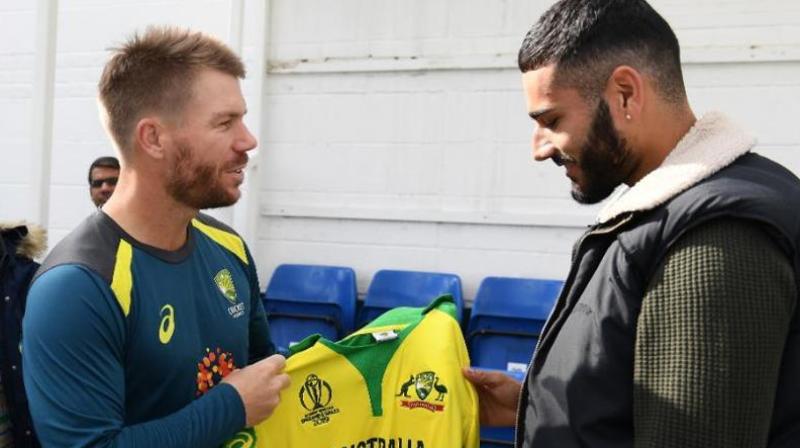 London: David Warner gave net bowler Jaykishan Plaha a signed Australia World Cup shirt on Saturday, a week after hitting the paceman in the head with a drive during a practice session at the Oval.

Australia halted their training session after the incident and Plaha was taken to hospital for checks, which showed no major injury.

The left-handed batsman met Plaha ahead of Australia's game against Sri Lanka at the same venue and presented him with an autographed team shirt.

"Last week, Jaykishan Plaha was hit on the head by a David Warner drive during an Australia training session," said a post on the official World Cup Twitter feed.

"Today, Warner met both Jaykishan and his mum before play, presented Jaykishan with an Australia shirt and wished him a speedy recovery."

"Warner gave me his match shirt from the World Cup. Really appreciate it. What happened was that I got hit on the head by David Warner on the front drive," Plaha said in a video posted on Twitter.

"Glad to be standing here actually. Hope to be back on the field soon. My dream is to be a professional cricketer as well."

Warner, who has returned from a ball-tampering ban along with teammate Steve Smith, has scored 281 runs at the World Cup in five matches so far, including a century and two fifties.

Australian cricket was plunged into mourning in 2014 when Test batsman Phillip Hughes died after being hit on the base of the skull during a domestic match.

Warner was playing in that match, between New South Wales and South Australia.