As both countries gear up to face each other in the ongoing tournament, relive these matches that are ingrained in cricketing fans' minds. 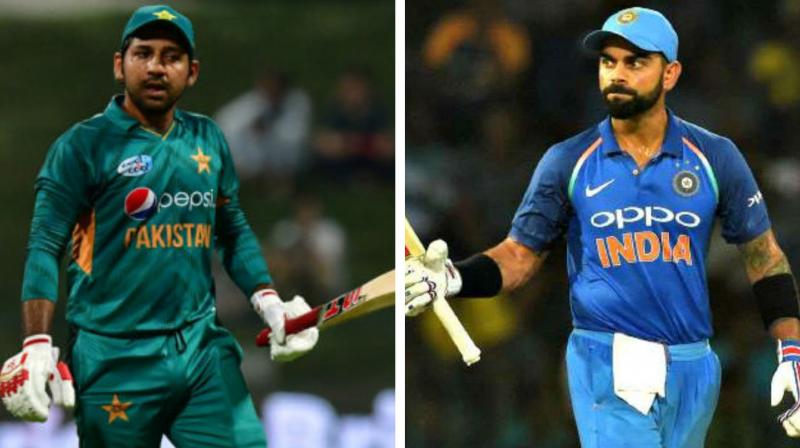 India and Pakistan take on each other on June 16 at Manchester. (Photo: AFP)

New Delhi: Cricket matches between India and Pakistan have always been the most anticipated ones and the rivals have had many close encounters on the cricketing. The camaraderie of players from both countries continue to remain excellent, but as soon as action resumes on the pitch, equations tend to change.

As both countries from the sub-continent gear up to face each other in the ongoing ICC Men's Cricket World Cup, here are a few matches that are ingrained in cricketing fanatics' minds.

This match is widely remembered for Pakistan's Javed Miandad mimicry of Kiran More behind the stumps. After opting to bat first, India posted a par score of 216 runs on the board for the loss of seven wickets. Sachin Tendulkar played a knock of 54 runs, whereas Mushtaq Ahmed scalped three wickets for Pakistan.

India was, however, able to defend the total as they won the match by 43 runs by scalping wickets in quick succession. Miandad held the fort for Pakistan at one end, but his dismissal paved the way for an Indian win.

However, Pakistan went on to win the 1992 World Cup.

India and Pakistan locked horns with each other in the Super Six match of the 2003 World Cup. Pakistan, after winning the toss, elected to bat first. Saeed Anwar's century powered Pakistan to 273 runs on the board. Indian openers Sachin Tendulkar and Virender Sehwag provided India with a quickfire start.

Everyone remembers Tendulkar's six over the third man off the bowling of Shoaib Akhtar. The Master Blaster was dismissed for 98, but Mohammad Kaif and Rahul Dravid ensured India's victory by six wickets. India reached the finals of the 2003 World Cup, but they were defeated by Australia in the finals.

When the teams met in the group stage, the match stopped the hearts of all cricketing fans. Batting first, India got off to a shaky start, but the cameos played by MS Dhoni and Irfan Pathan helped India post 141 runs on the board.

Defending 141, the Men in Blue kept scalping wickets at regular intervals. Misbah-ul-Haq held the fort for Pakistan, but he was not able to take the team over the line and the match ended in a draw. The match went on to the bowl-out and it was India who came out triumphant.

These two teams once again had a face off against each other in the finals of the tournament. India once again batted first and they were able to score 157 runs, owing to Gautam Gambhir's knock of 75 runs.

Pakistan lost wickets when they came out to chase the target and it was yet down to Misbah to take his team over the line. In the last over, as Pakistan required 13 runs, Misbah played a rash shot on the third ball of the over which was caught by S. Sreesanth, giving the Men in Blue a victory by five runs to win the first ever T20 World Cup.

India and Pakistan locked horns with each other in the 2011 World Cup semi-final. India came out to bat first and owing to Tendulkar's knock of 85, India posted 260 runs on the board. Pakistan kept giving favours to Men in Blue as they dropped catches at regular intervals. Tendulkar even got reprieves owing to DRS. Pakistan's chase never got steady momentum as they were seen under pressure throughout. Misbah top-scored for Pakistan, but the team lost the match by 29 runs. India went on to defeat Sri Lanka in the finals to lift the World Cup trophy after 28 years.

Pakistan famously defeated India in the 2017 ICC Champions Trophy finals and the Men in Blue would be looking to avenge the defeat in the ongoing ICC Men's Cricket World Cup.

India and Pakistan take on each other on June 16 at Manchester.