ICC CWC'19: 'I don't see it as a massive challenge': Virat Kohli

Kohli stressed that players have to maintain their mindset, act professionally and execute the plans against any opposition. 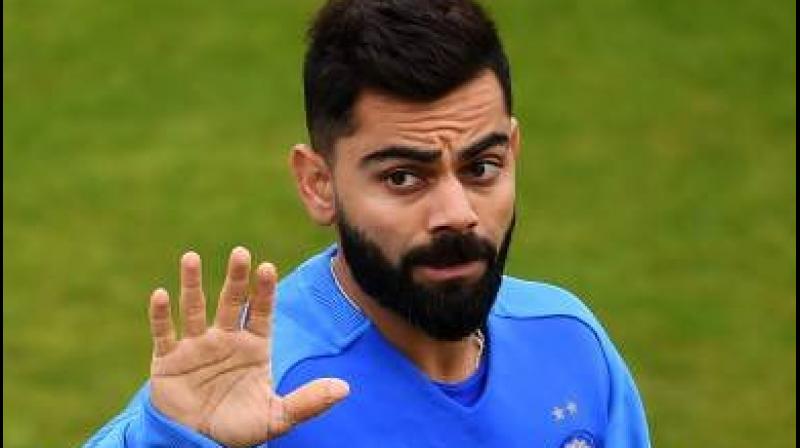 Virat said that cricket has always been a team sport and one individual does not affect the match that much. (Photo: Twitter)

Old Trafford: India captain Virat Kohli on Saturday dismiss any question of pressure in playing arch-rivals Pakistan in the World Cup cricket match on Sunday saying no one game is more special or less regardless of the opposition and that the atmosphere in the dressing room has not changed.

He indicated that depending on the weather and playing conditions there could be changes in the playing squad.

Addressing the pre-match press conference, he said in a philosophical vein that the World Cup match against Pakistan will not last a lifetime as it starts and ends at a certain time and the 50-over tournament will still go on even if the result goes against the indian team. Relationship with the Pakistani players was good, he said and praised a couple of them.

"I don't see it a massive challenge. If you play good cricket, follow basics better than the opposite then you end up winning the game. If we do our skills well that is enough. Our focus will be that and to do it consistently as it is a long tournament.

"The mood, atmosphere in the dressing room hasn't changed. No one game is more special or less important than others regardless of the opposition. We are the top side of the cricket we play. Our focus is on basics which makes us consistent. If you don't play well on the day the opposition can win," he said when asked about pressures in playing against Pakistan in a world cup tie.

"The match is not going to last a lifetime as it starts and ends at a certain time. This thing keeps you grounded as a cricketer. Even if we do not have the match going our way, the tournament will still go on. We just have to see how the weather pans out, need to be mentally ready for whatever the situation is," Kohli said in reply to another question.

The India captain highlighted that from a fan's point of view the match is very different. However, he stressed that players have to maintain their mindset, act professionally and execute the plans against any opposition.

He said that cricket has always been a team sport and one individual does not affect the match that much.

"From a fan's point of view, the match is very different. But players have to maintain their mindset which remains the same- be professional and execute plans be it South Africa, England, or Pakistan. A single person does not affect the outcome of the match in cricket, it does not happen often. As a cricketer, you just think about how you can showcase performance to make your team win. Every contribution matters and in the team, we recognise each player's efforts," he said.

Kohli said that the bowling unit is in a good mental space and he is not too bothered about how the bowling attack has been shaping up ahead of India-Pakistan clash.

"Our bowlers are in a very good mental space. They are all very experienced bowlers and they have put up good performances in the first two matches. I am not too bothered by our bowlers' preparation ahead of this match against Pakistan."

Both India and Pakistan players share good camaraderie with each other. Kohli said he has witnessed quite a few funny instances in the Pakistan team and he still remembers one involving veteran Shahid Afridi and Wahab Riaz during the 2011 edition of the World Cup.

"Over the years, I cannot explain an incident properly. I saw one by the opposition but I cannot elaborate. The situation involved Shahid Afridi and Wahab Riaz."

Kohli heaped praise on Pakistan all-rounder Shoaib Malik, saying he has always been friendly with him.

"Malik has achieved a lot for his team. Whenever I have interacted with him, he has been friendly and he has a good sense of humour. He has revived his career after making a comeback to the Pakistan team, he has been a performing cricketer for them," he said.

The Indian captain said the team is not tensed up over Shikhar Dhawan's injury as the side has good back-up options. He said K L Rahul can create impact by opening the batting.

Dhawan will be in plaster for a couple of weeks as he was hit on the thumb by Australian pacer Pat Cummins on June 9 and he is likely to miss the match against Pakistan.

"We selected the team keeping in mind that anyone can get injured at a given point of time. Rahul can create impact when he will come out to open the batting. We are not tensed regarding Dhawan's injury, we have depth in our squad to handle every situation," he said.

When asked about the potential threat from Pakistan fast bowler Mohammad Amir, Kohli said he is not here for the TRP or entertainment. He added that when he is on crease he just sees the white ball.

"I am not here for TRP. Whoever is in front of me I just see the white ball. One should vary of bowler's strength. I have no competition with them. If I will make runs then the rest 10 also have to perform well. You as a cricketer just think how much and how can you contribute to the team. Milestone is not important rather contribution, forming a partnership and holding the wicket is equally important," he added.

"Enjoy the match, it is just a cricket match," Kohli concluded.