ICC CWC'19: Australia vs Sri Lanka; Key players to watch out for

Earlier this week, Australia defeated their opponent Pakistan by 41 runs, prior to which they were defeated by India by 36 runs. 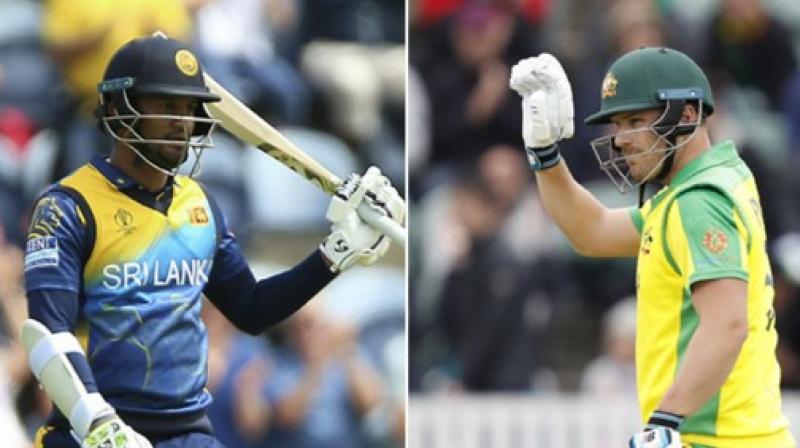 Sri Lanka got off to a bad start in the World Cup as their last two matches were abandoned due to rain. (Photo: AP)

New Delhi: Defending champions Australia will look to regain their winning streak by trouncing Sri Lanka in the ongoing ICC Men's Cricket World Cup match on June 15 at The Oval.

Earlier this week, Australia defeated their opponent Pakistan by 41 runs, prior to which they were defeated by India by 36 runs. Currently, Australia is at number two in the points table.

On the other hand, Sri Lanka got off to a bad start in the World Cup as their last two matches were abandoned due to rain. In the four matches Sri Lanka has played so far, they only managed to win against Afghanistan, forcing them to settle for the fifth position in the team standings.

Ahead of the crucial clash, here are some key players to look out for:

In the four matches Australia has played so far, Finch contributed 190 runs with the bat and took one wicket against Pakistan in the last match. Australia's one-day stint saw massive improvement thanks to skipper Finch, who amassed 451 runs in five matches to guide his side trump Pakistan in the recently concluded bilateral series.

The 29-year old left-arm pacer impressed cricket enthusiasts and critics alike with his last performance. Starc returned with figures of 5-46 against West Indies as he played a major role in turning the tables in favour of Australia. In four World Cup matches, Starc has nine wickets under his belt and will look to add more against Sri Lanka.

Sri Lankan skipper Karunaratne played an unbeaten knock of 52 against New Zealand in the first match and contributed 30 runs in the second game against Afghanistan. Under a lot of pressure and the ragtag attached to Sri Lanka, Karunaratne has to take his team back to its winning days.

One of the best pacers in the world, the 35-year-old Malinga is the master of the slow ball, which makes him a go-to wicket-taker. During the 2019 IPL final, the Sri Lankan's feat helped Mumbai Indians secure a close victory over Chennai Super Kings.

After being unsuccessful against New Zealand in first World Cup match, Malinga picked three wickets against Afghanistan in the second game.

Probably playing in his last World Cup, Malinga will be the crucial player for Sri Lanka.