England captain cut a frustrated figure after his team delivered a muddled and lacklustre performance. 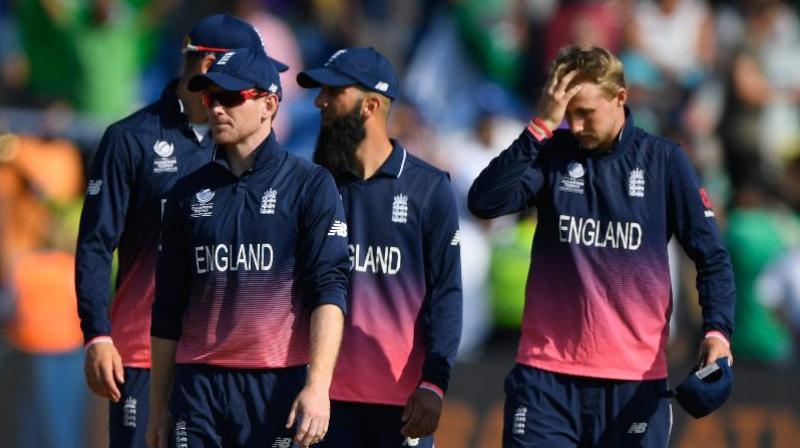 Cardiff: England captain Eoin Morgan cut a frustrated figure after his team delivered a muddled and lacklustre performance in a humiliating eight-wicket loss to Pakistan in the Champions Trophy semi-finals on Wednesday.

Since their dismal World Cup campaign in 2015, England have played a positive brand of cricket built on fearless batting, aggressive bowling and bristling intensity in the field.

But within touching distance of a first global 50-over title after three victories in the group stage, they crumbled limply to 211 all out and the bowlers failed to fire as Pakistan strolled to their target with nearly 13 overs to spare.

"We left ourselves short today adapting to conditions," Morgan told a news conference. "It's a big frustration because I think we've played some great cricket in this tournament so far, and we weren't anywhere close to it today."

England had scored over 300 in five of the last six one-day internationals in which they batted first.

But after grafting to 128 for two to lay a solid platform against Pakistan, they lost eight wickets for 83 runs in an innings which included only 15 fours and not a single six.

Ben Stokes, usually one of the most destructive batsmen in world cricket, needed 64 balls to scrape together 34 runs and he failed to muster a single boundary on a pitch Morgan described as difficult to bat on.

"The wicket was obviously slow and low and hard to get away to start with," Morgan said. "Every partnership we had started behind the rate, which put us under the pump a little bit, and none of our batsmen seemed to get away."

Morgan denied that England had been complacent after dominant victories over Bangladesh, New Zealand and world champions Australia in the group stage and a run of 11 wins in their last 12 one-day internationals.

"Certainly not, not over confident," he said. "We played against some really good sides recently, and we've managed to beat them. Certainly, that hasn't gone to our heads at all."

Morgan promised that the humbling loss to Pakistan would not change his team's approach as they continue to prepare for the 2019 World Cup.

"One of the huge contributing factors towards topping our table and playing very good cricket in the group stages is that we've stayed true to what we believe in and what's worked for us the last couple of years, and I think that's the continued formula for the future," he said. "Certainly, I think we're moving in the right direction."