Jadhav's figures of 2-22 off six overs were surprising given he is rarely used by India. 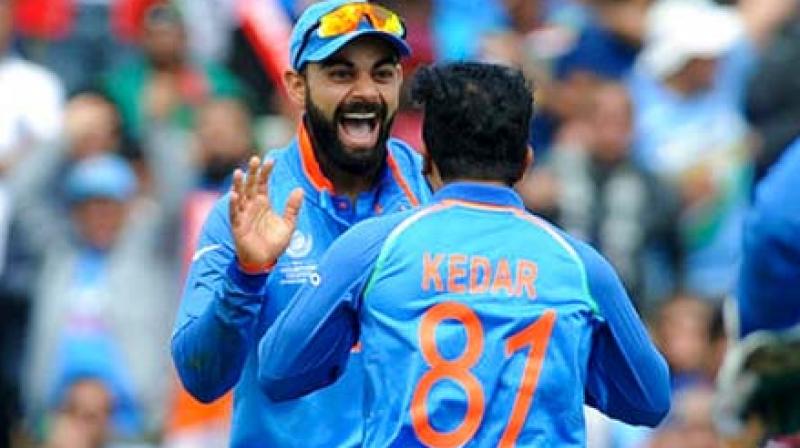 Birmingham: Kedar Jadhav was India's unlikely star as his innocuous offspin accounted for dangerman Tamim Iqbal and Mushfiqur Rahim, sparking Bangladesh's slide from a good position to 264-7 in the Champions Trophy semifinals on Thursday.

Tamim (70) and Mushfiqur (61) had a 123-run stand for the third wicket to establish a strong platform for Bangladesh in the biggest cricket match in its history.

Jadhav, with his awkward and ungainly style, slowed the Tigers by first getting through Tamim's attempted slog-sweep and bowling him for 159-3, before a full toss was dragged by Mushfiqur straight to captain Virat Kohli at midwicket for 184-5.

Jadhav's figures of 2-22 off six overs were surprising given he is rarely used by India, bowling just 30 overs and taking six wickets in 18 ODIs before this semifinal.

Captain Mashrafe Mortaza slapped 30 off 25 balls late in the innings to help Bangladesh to a more respectable score, but India - the defending champion - should be confident of chasing down that target on a good pitch and in warm conditions.

Bhuvneshwar Kumar removed Soumya Sarkar (0) in the sixth ball of the innings and Sabbir Rahman (19) at the end of the seventh over, then Tamim and Mushfiqur - two of Bangladesh's 'Big Five' - led a recovery.

The highlights of their stand included three straight fours from Tamim of spinner Ravichandran Ashwin and Mushfiqur's overhead scoop beyond Dhoni for two runs to bring up the century partnership.

After Tamim's departure, Shakib Al Hasan was brilliantly caught behind by wicketkeeper Mahendra Singh Dhoni off Ravindra Jadeja for 15.

Jasprit Bumrah struck late to remove Mahmadullah (21) and Mosaddek Hossain (15), but Mortaza's salvo that included five fours gave Bangladesh something to cling to.

Both teams announced unchanged lineups after India won the toss. Bangladesh was playing in the semifinals for the first time at an ICC tournament.