Sports   Cricket  15 Apr 2019  Windies can be a serious force to reckon with in ICCWC
Sports, Cricket

Windies can be a serious force to reckon with in ICCWC

It has been a little less than three years since Pollard played a One Day International (ODI) for the West Indies. 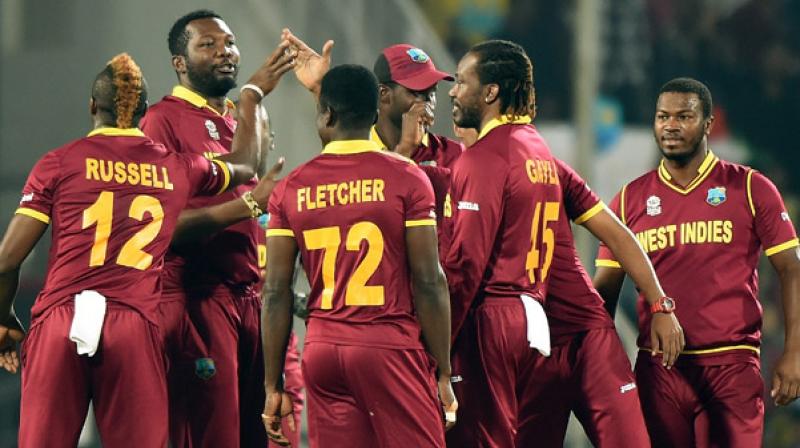 A renewed West Indies will certainly be the dark horse in the ICCWC 2019. (Photo: AFP)

While the debate over the selection of the Indian team for the International Cricket Council World Cup 2019 (ICCWC) to be announced today continues, it is raining runs and wickets from the West Indians in the ongoing edition of the Indian Premier League (IPL).

The performances of Andre Russell, Kieron Pollard, Alzarri Joseph, Chris Gayle and to a certain extent Sunil Narine have ensured that a bright Caribbean sun has been shining bright in the third week of India’s iconic tournament.

It has been a little less than three years since Pollard played a One Day International (ODI) for the West Indies. His absence was not a sabbatical, neither had form anything to do with it. Pollard, in his own words, was ‘blacklisted’.

The regime led by Cricket West Indies (CWI) President Whycliffe ‘Dave’ Cameron, that ruled cricket in the Caribbean for the past seven years, put a few cricketers out to pasture, including Darren Sammy who led the combined islands for 25 Test matches and 51 ODIs.

From October 2016 till date, Pollard has been parading his skills in the various ‘me too’ leagues that have mushroomed around the world after the success of the IPL. Joining him are other entertainers from the Caribbean including Gayle, Russell, DJ Bravo and Narine, among others.

The current and 12th edition of the IPL has seen these very West Indians, the wandering minstrels of world cricket, making a massive impact on the games played so far. Outstanding batting by Russell for Kolkata Knight Riders (KKR) has seen the team come right from behind and walk away with two winning points so crucial at this stage of the tournament.

Pollard’s decisive innings of 83 runs off 31 balls for Mumbai Indians (MI) against Kings XI Punjab (KXIP) at the Wankhede Stadium just showed how important he is as a player that can take the game away from the opponents.

This particular innings was not one that was all flash and dash but one that was played with responsibility. Pollard was standing in for regular skipper Rohit Sharma who was rested thanks to a strain.

Pollards innings against KXIP was very similar to that of Russell who scored an unbelievable 48 unbeaten runs against Royal Challengers Bangalore (RCB) when the chips were down and KKR needed to get past 205 runs. Russell’s next essay of 50 not out in a losing cause against Chennai Super Kings came when his team was 47 runs for 6 wickets.

That knock gave his side a bit of respectability (of having passed 100 runs) and a slim chance of winning the game.

Gayle, Bravo, Narine and Joseph, who made a sensational debut in this IPL for MI skittling Sunrisers Hyderabad with a dream spell of six wickets for a mere 12 runs (an IPL record) have also been steady performers for their teams. This just goes to show that the West Indies, if this current lot of players are retained for the ICCWC, will be a serious force to reckon with.

Thus far, in the build-up to ICCWC, hosts England are the favourites followed closely by a determined India and a resurgent Australia. A renewed team from the West Indies will ensure that cricket fans across the world will be happily showered with more entertainment in the form of players who were known to be masters of the shorter formats of the game.

With former West Indies team manager, Ricky Skerritt, ending Cameron’s controversial reign at CWI, players like Pollard who were out in the wilderness (thanks to differences they had with the Board on pay packages) will hopefully wear the red cap at the ICCWC.

The 31-year-old, along with an almost 40 Gayle will be a heady combination for the West Indies when they take on all opponents in ICC’s blue riband tournament.

The cricket world has never forgotten the dominance of the West Indies in the early 70s till the late 80s. While their magical batsmen pulverised bowing attacks from all over the world, their demon bowlers put the fear of God in batsmen with their thunderbolts.

No one can ever forget the magnificent hundreds scored by skipper Clive Lloyd and Sir Issac Vivian Alexander Richards in the first two World Cup finals that were played at Lord’s in 1975 and 1979. It took a superhuman effort by Kapil Dev and his team whose determination, as the tournament grew, to put a stop to the great Windies juggernaut at the same venue in 1983.

A renewed West Indies will certainly be the dark horse in the ICCWC 2019. World cricket will be happier with a strong Windies for the entertainment and joy they bring, not just to their fans but audiences allover the world.