'I wanted to get Russell out', says Imran Tahir

Tahir exacted revenge with the very next delivery, a flatter ball that Russell hit to substitute fielder Dhruv Shorey at long-on. 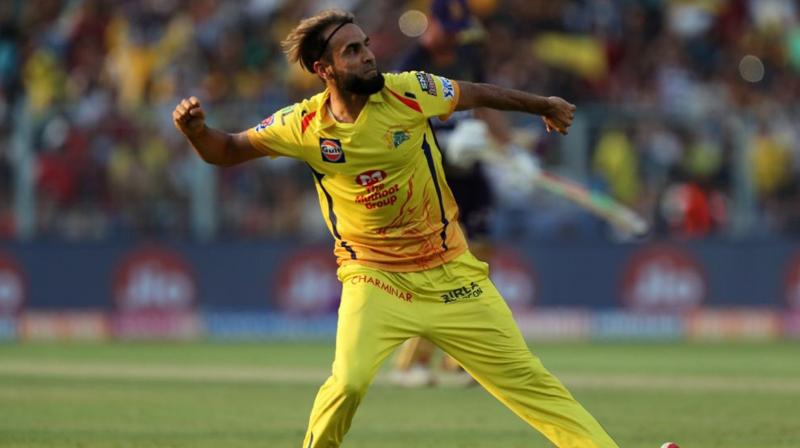 While Tahir will play in one last World Cup he has no intention of retiring from the game just yet. (Photo: BCCI)

New Delhi: Imran Tahir proved there is merit to the cricket adage that spinners get better with age after the South African claimed 4-27 in Chennai Super Kings’ five-wicket victory over Kolkata Knight Riders in the Indian Premier League (IPL) on Sunday.

The 40-year-old, who is set to shoulder South Africa’s spin duties in his final World Cup this year, helped Chennai to their seventh win in eight matches, tightening their grip on top spot on the IPL leaderboard.

The leg-spinner ended opener Chris Lynn’s 82-run blitz and dealt an even bigger blow to Kolkata’s hopes when he dismissed Andre Russell, who leads the IPL six-hitters’ list and has plundered 312 runs from seven innings with a 213-plus strike rate.

Having sent back Nitish Rana and Robin Uthappa in the space of three balls, Tahir returned to begin his eventful third over with a wide delivery at Kolkata’s Eden Gardens.

He sent back Lynn with his first legitimate delivery of that over but in walked Jamaican Russell, who hit the first ball he faced from Tahir for a four, defended the next, and then sent the following one sailing over the long-on ropes.

Tahir exacted revenge with the very next delivery, a flatter ball that Russell hit to substitute fielder Dhruv Shorey at long-on.

“I could’ve bowled one or two dot balls or may have conceded one (run) but I wanted to take the challenge,” the Pakistan-born spinner said after claiming his best IPL figures which also earned him the player-of-the-match award.

“I wanted to get him out, it’s as simple as that. He hit me for a six and a four which was fine but I got his wicket which was very important for the team, more than personal achievement.

“He’s such a good player, especially in the death overs.”

While Tahir will play in one last World Cup he has no intention of retiring from the game just yet.