Sports   Cricket  15 Apr 2019  Finch to choose either Khawaja or Warner to open batting with him at the World Cup
Sports, Cricket

The Australia captain and Warner have had formed a successful first wicket partnership and had opened during the 2015 edition on home soil. 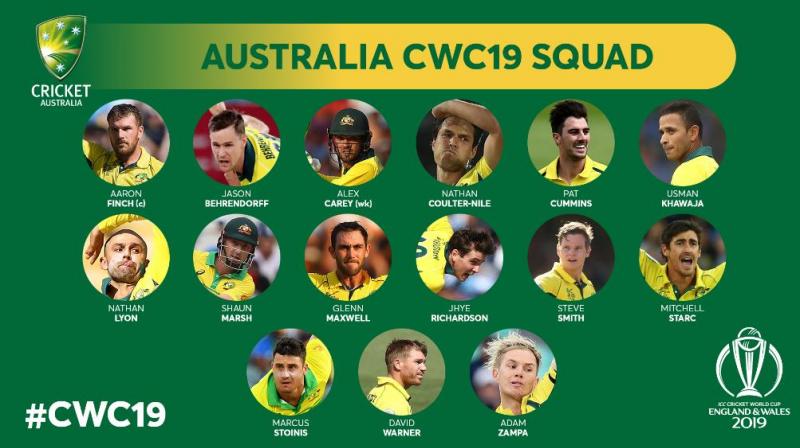 Finch also had brilliant stand together during the series against India and Pakistan. (Photo: Icc Cricket world cup/ twitter)

Melbourne: Australia captain Aaron Finch on Monday said he is yet to decide between David Warner and Usman Khawaja to open the batting with him at the World Cup. Finch, however, indicated he will favour a left and right opening combination in Australia’s title defence.

The Australia captain and Warner have had formed a successful first wicket partnership and had opened during the 2015 edition on home soil. On the other hand, Khawaja and Finch also had brilliant stand together during the series against India and Pakistan.

“There’s going to be plenty to think about over the next 6-8 weeks … to try and find our best combination and the best way to structure up our side. Davey’s (David) record at the top is unbelievable and Uzzie’s (Usman) been in great nick recently. Whichever way we go, there’s scope to mix and match that as we go through the tournament,” cricket.com.au quoted Finch, as saying.

“We’ll work that out, there’s nothing set in stone right now. I think all three of us could (bat at No.3). I’ve probably got the least experience out of all three of us in that position in limited-overs cricket. It’s something we’ll juggle and tinker with. I think a left-right combination is probably the way we’ll go, it just depends on which left-hander (opens).”

When asked whether Khawaja would bat at number three if Warner grabs the opening spot, the Australia captain said: “I’d say yes, I’d imagine yes, but that’s still a long way out. He’s a class player and the form that he’s been in over the last six months in one-day cricket has been unbelievable. He’s done everything he can; he’s got big runs and big hundreds in important games and when a series has been on the line, so that’s a huge thing. And when he gets in, he’s so hard to stop as well.”

Meanwhile, when questioned if Steve Smith will be part of the playing XI, Finch said: “I’ll say yes; the short answer is yes. All of that stuff is up for debate,” he added. “Now that the squad’s been picked and we’ve got 15 to pick from, it makes things a lot clearer and we can start mapping that stuff out. When you’re still looking at 18 or 19 players to find the 11, I think it’s a lot tougher.”

Although Finch was not part of the selection panel that picked the 15-member squad, he will get the responsibility to form the batting order.

“If you push something hard enough, you can convince them (players). Nine times out of 10, maybe 49 out of 50, everyone’s on a same page or a very similar page. And you’re generally tossing up whether to play an extra bowler or an extra all-rounder, something like that,” he said.

“We’re generally all on the same page anyway, but at times it’s important to have good healthy debate. I think that keeps everyone accountable and it keeps everyone on their toes,” Finch said.

The World Cup will take place in England and Wales from May 30 to July 14. Australia will open its title defence against Afghanistan at the Bristol County Ground on June 1.