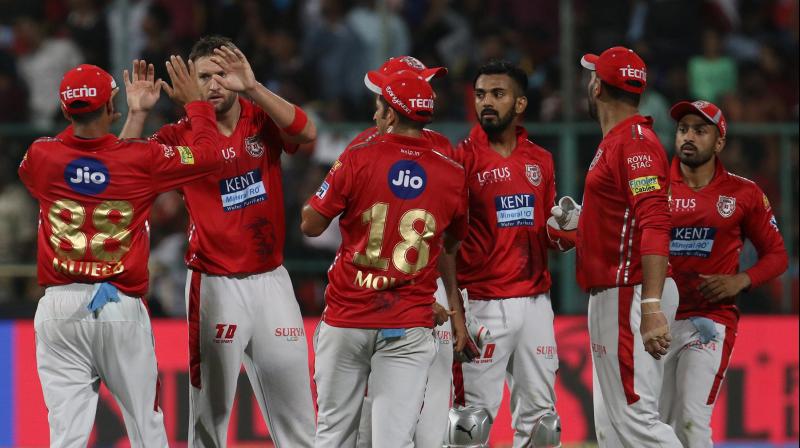 KXIP held their nerves to pick up their second win of the season. (Photo: BCCI)

The hosts set a target of 198 to chase and it proved to be too much for the two-time winners.

KXIP started strong by dismissing both openers Shane Watson and Murali Vijay and just when the men in yellow started absorbing the pressure, Ashwin struck with the precious wicket of Sam Billings.

MS Dhoni and Ambati Rayudu stiched a 57-run stand for the 4th wicket, but the opposition bowlers did not leak away too many runs.

Rayudu fell short of his half-century by one run after falling victim to Ashwin via a run-out.

MS Dhoni kept the faith alive with a gritty knock in the death overs, however, KXIP held their nerves to pick up their second win of the season.

CAUGHT! Tye claims his second wicket. Outside off and Jadeja slashes hard, mistiming his shot that goes high up in the air. Finds R Ashwin at cover.

RUN OUT! And Rayudu has to return back to the pavilion one run short of a fifty. Fullish delivery by Sran punched towards cover. There's miscommunication with Dhoni at the other end and before Rayudu can make it back safe, Ashwin hits the bulls eye!

WICKET! Ashwin gets the big fish and it's come after a hard fought review. Billings shuffles across, trying to attempt a sweep off a quicker delivery by the bowler. DRS review show ball pitching in line and crashing into off stump. Massive blow for the visitors.

WICKET! Tye strikes with the wicket of Vijay. Knuckle ball and the batsman tries to clobber it over long off. Mistimes his shot and finds Barinder Sran at mid-off.

1st innings: Kings XI Punjab (KXIP) posted 197-7 on board after being put to bat by Chennai Super Kings (CSK) at the PCA IS Bindra Stadium in Mohali on Sunday.

The hosts got off to a flyer as KL Rahul and Chris Gayle fired at the top. But just before the duo could strike a 100-run partnership, Harbhajan Singh dismissed the Karnataka batsman.

Shane Watson provided more hope for CSK with the wicket of Chris Gayler later on and the pressure fell on Mayank Agarwal and Yuvraj Singh.

When all hope was lost, Karun Nair chipped with an influential cameo to help KXIP set a comprehensive target.

WICKET! Bravo outfoxes Nair with a slower delivery. Finishes the over giving away only four runs.

WICKET! Short ball by Thakur, Ashwin steps back and goes for the pull. Gets a top edge that is collected by Dhoni.

WICKET! Cross seamer, into the batsman. Yuvraj aims to guide it over the keeper's head but only manages to get a nick that is collected by MS Dhoni.

LBW! Tahir is on a hat-trick. Googly and Finch fails to read it as he is trapped ahead of the stumps. Umpire raises his finger.

WICKET! Tahir strikes. Agarwal's fine cameo comes to an end. Aims to go big down the ground but doesn't connect well. Finds Jadeja at long on.

WICKET! Big sigh of relief for CSK. Banged in short, Gayle look to guide it down fine leg but finds the man at short fine leg.

He's back in the action and how!

WICKET! Harbhajan strikes and Rahul will be disappointed to throw his wicket away. Full toss outside off and the batsman chips it straight to Bravo at cover.

Preview: High on confidence, Chennai Super Kings (CSK) will aim to continue their winning run when they face with Kings XI Punjab (KXIP) at the PCA IS Bindra Stadium in Mohali on Sunday.

A victory against Ravichandran Ashwin and co will take the two-time winners on top of the IPL table and they wouldn’t want to miss out on that opportunity with two back to back wins.

The Lions, meanwhile, have endured a loss and a win under the new skipper and former CSK all-rounder Ashwin. They will need a much more bolstering performance from their batting line-up if they are to break CSK’s duck.

KL Rahul has been firing at the top but apart from that, the batsmen have failed to get going.

MS Dhoni has got his team combination spot on but injuries to the likes of Kedar Jadhav and Suresh Raina is a big concern.

Can Ashwin outfox one of India’s most successful captains or will Dhoni come out on top against his former CSK teammate?

CSK have won the toss and elect to field.

Here's the toss update for the second game tonight. @ChennaiIPL have won the toss and have elected to bowl first agains @lionsdenkxip #KXIPvCSK #VIVOIPL pic.twitter.com/UwsUIkLg2M