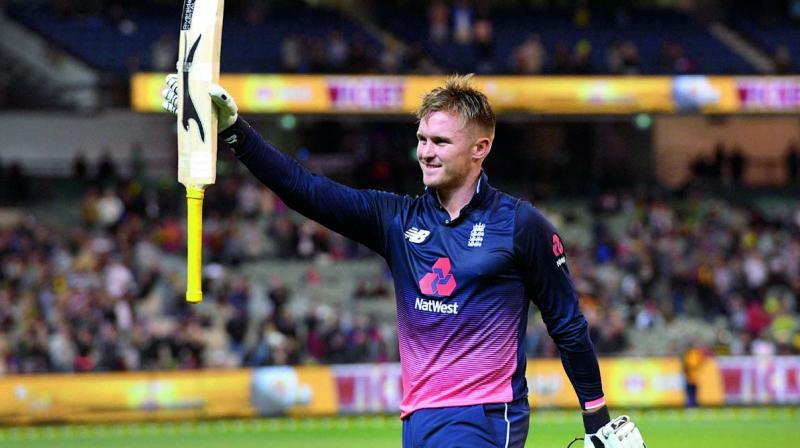 England’s Jason Roy acknowledges the applause after making 180 against Australia in their opening ODI at the MCG in Melbourne. (Photo: AFP)

Melbourne: Opener Jason Roy recorded the highest-ever one-day international score by an England player as the tourists finally had something to celebrate with a five-wicket win over Australia on Sunday.

After their wretched Ashes campaign, in which they were beaten 4-0, the tourists chased down a hefty Australian total at the Melbourne Cricket Ground to win with seven balls to spare in the opener of the five-match ODI series.

The successful chase was also a record for a one-day international at the MCG, eclipsing Australia’s 297/4 against England in 2011, and vindicated captain Eoin Morgan’s decision to bowl first.

Having been an onlooker for the Test series, Roy was an unlikely hero. But he rode his luck to produce a record in limited-overs cricket for England and also a new benchmark for a batsman at the MCG in a one-day international.

The swashbuckling right-hander lived dangerously throughout his innings, charging along at better than a run a ball and reaching his half-century off only 32 balls.

He survived a run-out scare and an lbw decision which was overturned upon review, and lofted several balls just out of the reach of frustrated Australian fielders on the way to his fifth ODI century.

Roy was just five when Mitchell Starc could have run him out with a direct hit. He duly punished the Australian fast bowler by taking 14 off his next over as the tourists raced past 50 in the fifth over.

He was seemingly trapped lbw by spinner Adam Zampa on 91, but a review showed the ball hit him outside the line of off stump and the decision was overturned.

Roy wasted little time making the most of that piece of fortune.