Two Mumbai stalwarts similar in attitude come immediately to mind: Amol Muzumdar from the recent past and Abhishek in the current side. 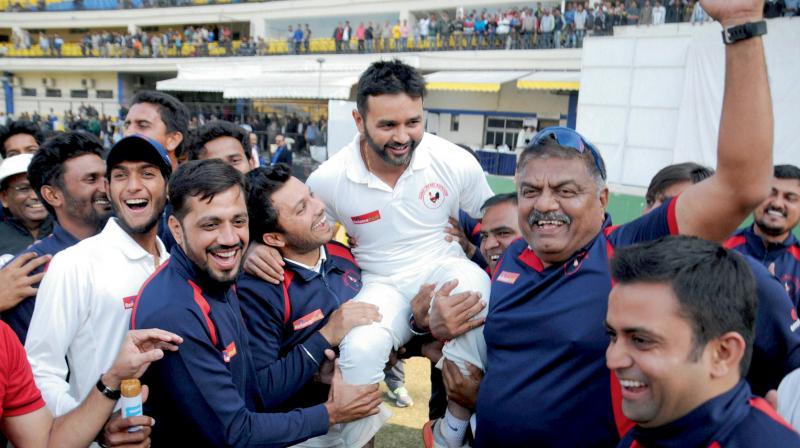 In a tumultuous home season, Gujarat winning the Ranji Trophy for the first time has been among the more memorable events. That their maiden victory came over 41-time champion Mumbai made it only sweeter.

It will be argued that Mumbai were frequently without stalwarts Rohit Sharma and Ajinkya Rahane, and too error-prone in the final where they put down a plethora of catches. But that doesn’t diminish Gujarat’s magnificent performance any.

In domestic cricket, Mumbai’s reputation is of a hardy, unrelenting side. They are so used to winning that teams opposing them always have a massive psychological hurdle to cross. Beating Mumbai requires playing a notch higher in terms of skill and mental toughness, which Gujarat showed in ample measure.

Scoring in excess of 300 in the last innings is never easy, and particularly so in the final of the country’s premier tournament against the defending champions. Gujarat’s players had to hold their nerve, show self-belief. They did this admirably in thwarting Mumbai.

Gujarat were playing in a Ranji final after 66 years. That fact would have hung heavy on a young side that does not boast many stars. But right through the season, and particularly in the semi-final when they beat Jharkand after conceding the first innings lead, the players showed ambition and great commitment.

At the fulcrum of this triumph is clearly Parthiv Patel, the effervescent wicket-keeper batsman and also captain. He was the most experienced hand, the mastermind as also the best performing player when it mattered most.

In the final, Parthiv’s two knocks of 90 and 143 swung the match Gujarat’s way. He chanced his arm and rode his luck. But the guts-and-glory approach was well thought out given the inexperience of his side. In the circumstances, attrition could have been counter-productive.

It’s been a remarkable season for Parthiv who also found his way into the Test team after Wridhiman Saha was injured. He’d been out of the national side for almost eight years but resumed his career with delightful nonchalance, as if there had been no break.

Excellent contributions in the matches he played have left leave the selectors, coach Kumble and captain Kohli in a delightful dilemma for the Test series against Australia. Will Parthiv be in the team once Saha is fit?

From the little one knows of him — and a lot of what one has seen — Parthiv is unlikely to spend days and weeks in anxiety about his future. He will probably see winning the Ranji title as the more gratifying achievement this season.

I have always marvelled at players like Parthiv who keep going for years with a smile on their face even though they may have been bypassed for the India team, performing season after season uncomplainingly, and more pertinently uncompromisingly.

Two Mumbai stalwarts similar in attitude come immediately to mind: Amol Muzumdar from the recent past and Abhishek Nayar in the current side. With a little luck, both could have been in India colours for some length of time at least. There are obviously examples from other domestic teams too. Deep passion for cricket and a strong sense of duty, I believe, keeps them performing at a consistently high level for a long period of time.

Though a place in the India team and stardom eludes them, these are the players who succour domestic cricket and become mentors for youngsters. Their contribution in improving — or at least sustaining — the health of Indian cricket is enormous though rarely acknowledged.

All told, it’s been a fantastic Ranji Trophy tournament. Apart from those who shone in the final and elsewhere, there was the emergence of young guns Rishab Pant, Ishan Kishan and Prithvi Shaw — all below 20, all playing spectacularly — showing the depth of talent that exists in the country.

My one grouse is the decision to play all matches this year at neutral venues. The need to mitigate home advantage gained by preparation of wickets that suit only one side is well-founded, but this can surely be addressed in other ways.

Neutral venues made for sparse crowds for all matches, including the riveting semi-finals and final. That is hardly the way to honour and incentivise talent or indeed promote the longest format of the game.